Reciting Quran A Light in the Dark for Visually-Impaired Man 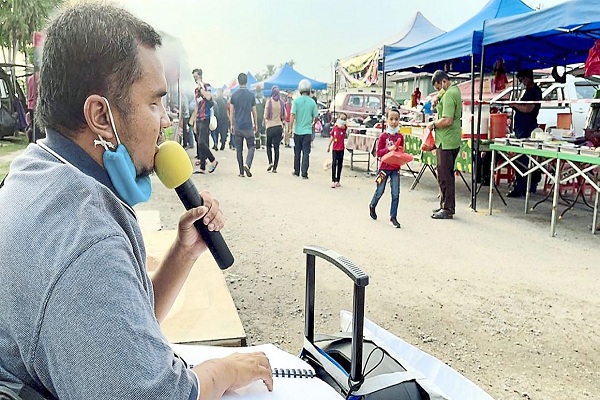 The 30-year-old can be seen running his fingers across a thick copy of Braille Quran and reciting it using a portable microphone and speaker.

“My income depends on the donations from visitors to the bazaar and in the morning, I do my recital at the wet market,” he said.

The Kuantan native said he decided to spend his Ramadan in Melaka this year.

“I travelled to other states during Ramadan in previous years,” he said.

Muhammad Rahmat said a Grab driver would send him to and from the locations in the morning and evening.

“He doesn’t charge me anything and I sometimes offer to pay for meals when he breaks his fast,” he said.

Muhammad Rahmat found it daunting when he first started reading the Braille Quran.

“I began learning each page of the holy text as a teenager and now, I have memorized it,” he said.

If there’s one thing Muhammad Rahmat wishes for this Hari Raya, it is to meet his biological mother whom he believes still lives in Kuantan.

“I was given away to a welfare home for adoption. Later, a family from Kuantan cared for me until I completed my education.

“I have been journeying throughout the country since I was 18 doing various jobs,” he added.