Webinar in Spain to Discuss Moral Life in View of Muslim, Christian Mystics

General
News ID: 3474727
TEHRAN (IQNA) – A webinar titled “Living a Moral Life in View of Muslim and Christian Mystics” is planned to be held by the Iranian Cultural Center in Spain on May 18. 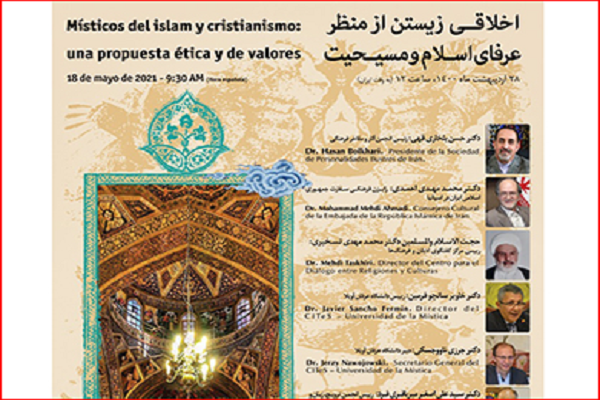 According to the Islamic Culture and Relations Organization, the online program will be organized in cooperation with Avila Catholic University of Mysticism, the Association of Cultural Works and Honorary Figures, Cultural Deputy of the Iranian Ministry of Islamic Culture and Guidance and the organization’s Center for Dialogue among Religions and Cultures.

Hassan Bolkhari Qahi, head of the association, Mohammad Mahdi Ahmad, Iranian cultural attaché in Spain, Hojat-ol-Islam Mohammad Mehdi Taskhiri, head of the center, Hamed Naji Esfahani, from Isfahan University, and Seyed Ali Asghar Mirbaqeri Fard, head of the Association for Promotion of Persian Language and Literature, will be among the speakers at the webinar.

The program will also be addressed by the president of Avila University, its vice president and a teacher of the university.