General
News ID: 3474899
TEHRAN (IQNA) – Israeli forces cracked down on a protest rally in the holy occupied city of al-Quds’ Sheikh Jarrah neighborhood, the latest focus of the regime’s ethnic cleansing campaign against the Palestinians. 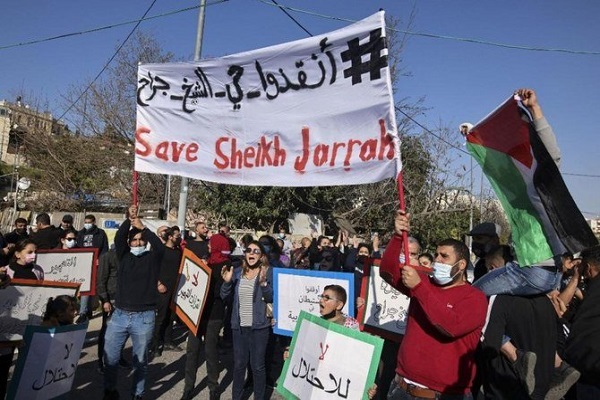 Footage tweeted by the Palestinian Shehab news agency showed the forces wading right into the conspicuously peaceful rally in the area that is located in the occupied Palestinian territory of the West Bank on Saturday. The provocative and fully-armed intervention came as the participants were simply walking side by side and holding up placards.

Several troops manhandled the reporter as she was screaming, “Don’t touch. Enough. Stop.” They backed her into a corner, handcuffing her roughly away and forcing her into a car.

The attack was met with far-reaching condemnation, including by the West Bank-based Palestinian Authority’s information ministry.

The Vienna-headquartered International Press Institute (IPI) also denounced the attack, reminding that al-Budeiri was subjected to the treatment while performing her journalistic duty.

“Budeiri was detained after covering protests in the Sheikh Jarrah neighborhood. Video of the incident shows that Budeiri was wearing a vest clearly marked ‘Press’ and according to Al Jazeera was attempting to show her Israeli-issued press card as she was dragged away by Israeli forces. Al Jazeera also said that police damaged equipment belonging to one its cameramen, Nabil Mazzawi,” the institute noted.

Moshir al-Masri, a senior member of the resistance movement Hamas that is based in the nearby Palestinian territory of the Gaza Strip, also blasted the the attack, calling it an instance of “savage behavior.”

The forces also tried to cover up the cameras that were being used by bystanders to record the incident and attacked others, who were filming.

Last month, the Israeli regime ordered the military to attack the neighborhood and forcibly remove the Palestinians from their ancestral homes there.

The raid enraged the Palestinians throughout not only the occupied West Bank, but also the rest of the occupied territories and the Israeli-blockaded Gaza Strip.

The regime killed scores of people, who had risen up across the West Bank in protest. It also unleashed its war machine on Gaza, martyring some 254 others there too.

In another attack on journalism, the Israeli air force razed down a tower hosting international journalists in Gaza during the war.

Global organizations and countless world leaders have been releasing a torrent of condemnatory statements concerning the violence across the Palestinian territories, including the bombing of the tower.

“The extended detention of journalists and the many attacks against the media that we have witnessed in the past weeks appear to be part of an ongoing effort by Israel to suppress independent coverage, which is greatly concerning and in breach of international treaties.”