Police Called After Swastika Painted on Mosque in Canada’s Edmonton

General
News ID: 3474963
TEHRAN (IQNA) – The president of the Baitul Hadi Mosque in east Edmonton, Canada, said he has felt awful ever since he discovered a large swastika that someone spray-painted on the back of the building. 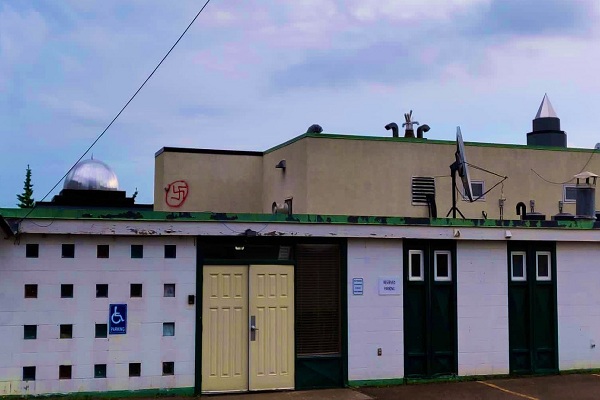 “It was not a good feeling that a symbol of hate was painted on our wall — at a mosque, which is usually a place of worship, a place of gathering,” Humayun Ahmed told Global News on Tuesday night.

He said the vandalism was first spotted in the morning, and police were ​contacted. He said the symbol of hate will be removed once the investigation is complete.

“(We are) sad and troubled,” Humayun said, adding that the mosque has had windows smashed before but “this is a different nature.”

The Muslim organization Ahmadiyya Muslim Jama`at Canada issued a statement saying it was “deeply troubled and concerned” to learn of the symbol being painted on the mosque.

“We are deeply disturbed by the rising acts of violence against the Muslim community,” said Nasir Butt, the imam of the Baitul Hadi Mosque.

The vandalism comes as recent attacks against Muslims have thrust Islamophobia back into the national spotlight.

On June 6,​​ four members of a Muslim family in London, Ont., were killed and another injured after they were hit by a vehicle while out for a walk. Police have said they believe the attack was motivated by hate, and the suspect was charged with murder and terrorism.

“It’s tough,” Humayun said. “We are still saddened by the tragedy we saw in London, Ont.

“It seems that Islamophobia has been on the rise recently.”

In Edmonton, a group representing Somali Canadians alleges a Black woman wearing a hijab was walking by herself in northeast Edmonton on Friday night when a man grabbed her by her neck and pushed her to the sidewalk before fleeing the scene.

There have been attacks on Muslim women in Alberta’s capital in recent months.

“I think it is about time that this is taken seriously and something is done about Islamophobia,” Humayun said. “Canada is a great country. It promotes multiculturalism.

“It’s a country that is famous for its message of peace and inclusion, but this event has shaken us a bit about the direction in which the society is moving slowly.”

Humayun said he believes recent attacks on Muslims are driven by a hatred of Islam. He said Islam is a religion of peace and his mosque tries to engage with its neighbours and other faith communities to bond over what they have in common rather than what makes them different.

“This could happen to any place of worship,” he said, saying he offers support for other churches and synagogues as well, the Global News reported.

“It’s a time for us to come together… (and) find ways to address this hatred with a united message of letting go of any kind of anger or hatred and try to understand each other.

“(We will) keep on spreading the message of peace and love. We wish for the community to be united against this kind of hate.”