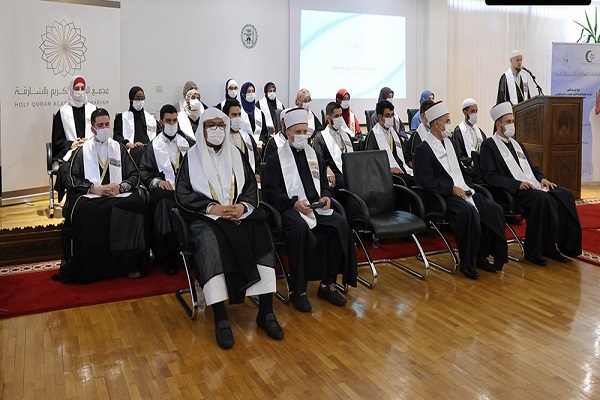 The ceremony in Croatia’s capital, Zagreb, saw the graduation of 38 male and female students from 28 European countries, Sharjah24.ae reported.

The academy’s activities span 133 countries and its students come from every continent.

The total number of students enrolled in the “global e-reader” reached 432, with 288 students completing the recitation of the Holy Quran with its various narrations and recitations.

In light of the world’s experience with the Corona pandemic and precautionary measures, as well as the difficulty of gathering graduates in one country, the academy has decided that students will be graduated in 6 regional celebrations, one from each of the world’s continents, and students from neighboring countries will be invited for the chosen country.

The first ceremony was held in Sharjah under the patronage and presence of Sheikh Dr. Sultan bin Mohamed Al Qasimi, Supreme Council Member and Ruler of Sharjah, and 87 male and female Hafizes of various recitations were graduated from UAE citizens and residents, and UAE neighboring countries.

The second ceremony, the African continent ceremony, was held in Nairobi, Kenya, and saw the graduation of 73 students from 41 African countries.