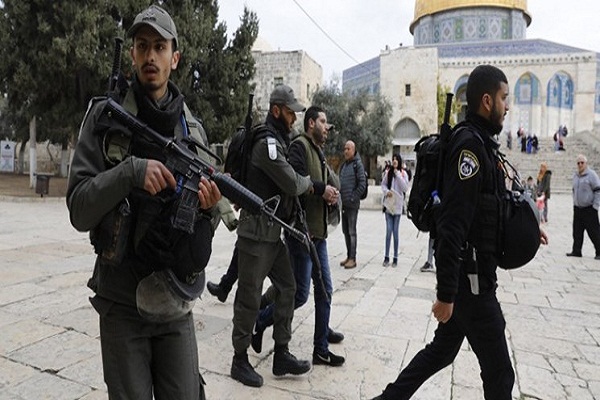 According to Safa news agency, they attacked worshippers and a sit-in protest staged in condemnation of Israeli settlers’ continuous attacks against Palestinians.

More tensions and clashes are expected as the Israeli forces and settlers have surrounded the worshipers and protesters at the compound.

On Saturday, Israeli forces attacked a sit-in protest in al-Tiwani area, east of Masafer Yatta to the south of Hebron, in the southern occupied West Bank.

The sit-in protest was called for by Fatah movement in Yatta, the anti-settlement and wall committee, the Protection and Resilience Committees in Musafir Yatta and the mountains of southern Hebron, and the Popular Struggle Front, on the occasion of the 54th anniversary of the founding of Fatah movement and in support of Palestinians in al-Tiwani, who are subjected to ongoing violations by the Israeli occupation and its settlers with the aim of taking over their land for the benefit of settlement expansion.

Israeli forces attacked protesters with tear gas canisters and stun grenades, and beat up a number of them. They also prevented journalists’ access to the area under the pretext that the area is a military zone.

Speakers at the sit-in affirmed the importance of promoting unity and cohesion and confronting all attempts by the occupation and its settlers, aimed at displacing Palestinians and stealing their lands and properties.