General
The link was copied
News ID: 3475365
TEHRAN (IQNA) – The secretary general of al-Nujaba resistance movement said the Iraqi resistance is not deceived by the Americans and would never reconcile with the occupying enemy. 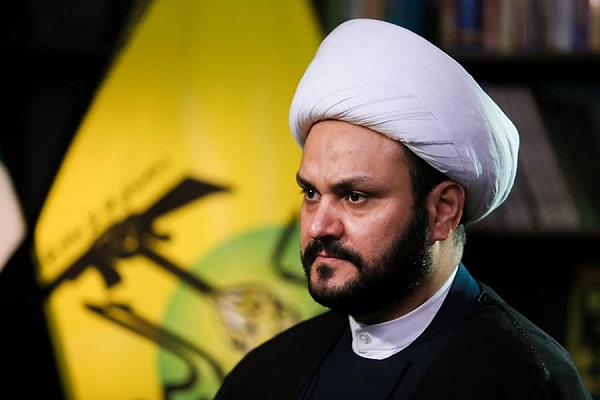 In a statement issued on the occasion of Eid al-Ghadir, Hojat-ol-Islam Akram al-Kaabi called the joint statement of the Iraqi and American foreign ministries “worthless” and citing the deception of the American government, noted that the Islamic Resistance would never reconcile with the occupying enemy.

According to the Communication and Media Affairs Centre of al-‎Nujaba in Iran, the cleric issued a statement in which he offered his congratulations on the joyous occasion of Eid al-Ghadir and announced, “At the same time, we emphasize that any engagement with the lying and deceitful United States is useless except through the use of force.”

Hojat-ol-Islam al-Kaabi described the joint statement of the Iraqi and American Foreign Ministries as “worthless” and explained, “This statement does not explicitly imply the practical retreat of American forces from the north to south and from east to west of Iraq, as well as from the country’s territory and airspace.”

He also called the change of the title of the foreign occupying forces from combat troops to advisors a “false trick” and added, “This deception only works for themselves and the patriotic Iraqis will not be able to cope with it at all.”

At the end of his statement, the secretary-general of al-Nujaba stated, “Our position and resistance will be stable until the complete liberation of our beloved country and the restoration of the sovereignty of Iraq and the establishment of the great celebration of victory.”