General
News ID: 3476151
TEHRAN (IQNA) – The Secretary General of Hezbollah pointed to the need for strengthening unity among Muslim nations, describing the issue of Palestine as a point of consensus among Muslims. 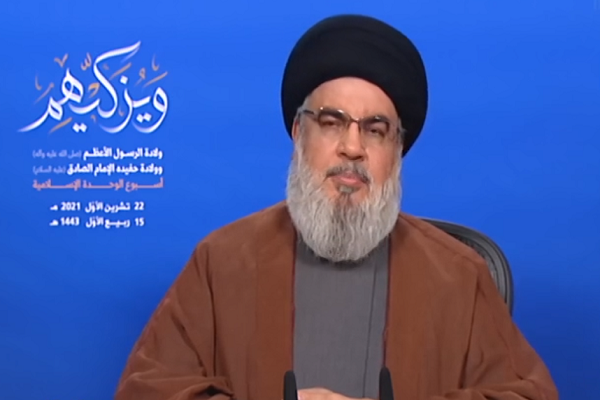 Sayyed Hassan Nasrallah made the remarks in a televised speech on Friday on the occasion of the birth anniversary of Prophet Muhammad (PBUH).

“Gaza is facing problems such as siege, sanctions, unemployment, and refugees. The Zionist enemy is a threat to all the region,” he said, adding that reviewing the characteristics of Prophet (PBUH) reminds us the responsibility that we have towards Palestine.

Naming Yemen as one of the other important issues in the region, Nasrallah added the oppressed Yemeni people have been facing hostilities for years. He called on all Muslims and Islamic scholars to rise and help the people of Yemen.

Thanks to Imam Khomeini (RA) and Islamic Revolution, different viewpoints about the birth anniversary of Prophet Muhammad (PBUH) have been turned into a source of unity by naming these days as the Unity Week.

Elsewhere in his remarks, Nasrallah deplored Daesh (ISIL or ISIS) terrorists’ use of the Prophet’s name for committing their crimes. One of the top obligations of the Muslim scholars is to defend the name of the Prophet (PBUH) in the face of these murderers who are introducing Islam to the world in its worst form.

"The Americans admit that they created Daesh. However, some do not like to hear this. What is oddly strange is the silence of some parties surrounding the savage actions of Daesh."