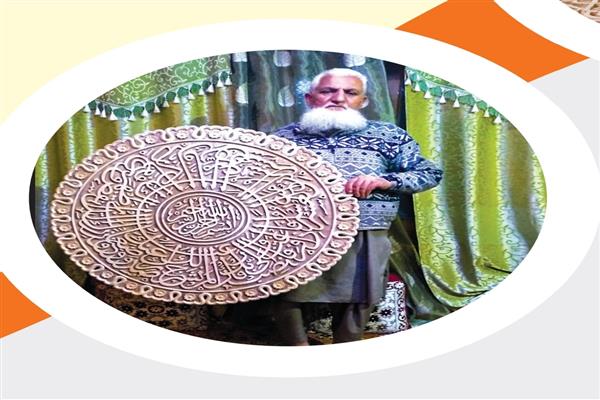 Sheikh has been involved professionally in the hard-wood carving for the past forty-five years and despite having the duty of colony’s president and Masjid’s Imam on his shoulders, his tryst with his craft has been honest all along.

Rather than working in somebody else’s Karkhana (workshop), Sheikh has dedicated a small room in his house for his carving work and toils eight hours a day over his masterpieces. Woodcarving being an intricate work in nature is a very demanding profession.

“Woodcarving is very arduous and laborious work. It takes patience, grit, and dedication, and it also takes a long time to master,” Sheikh comments.

Sheikh does not come from a traditional wood carving background. No one, except his uncle, was into the carving profession at the time he joined the profession. “Forty-five years ago, when I chose the profession, it offered comfortable earning and was considered a respectable job,” Sheikh adds on the subject of why he chose the profession in the first place and went through all the hardships that are required to become a craftsman.

Sheikh says that he ventured into the carving profession soon after passing his matriculation in the early 1970s, and in 2007 a friend offered him a calligraphy job in Dubai where he did the carving job for almost a decade.

Sheikh, after returning to Kashmir and having picked up on the carving patterns of the world’s best wood carving styles, thought of introducing Islamic Calligraphy to Kashmir’s woodwork.

While speaking on his inspiration behind the idea to introduce Islamic calligraphy to Kashmiri woodwork, Sheikh said that after having spent a decade in Dubai doing crest work, carving and carpentry on hardwood, when he returned to Kashmir four years ago, he thought of introducing the Islamic calligraphy to Kashmiri woodwork. “I assumed that It would be a beautiful addition to an already beautiful craft,” Sheikh adds.

Sheikh is inspired by the Indonesian and Iranian calligraphy on hardwood and says that though the Islamic calligraphy done in Iran has an impression of the Persian script, it still is very beautiful.

For over a month, Sheikh uses more than 40 carving tools/chisels to craft a single calligraphic piece that contains the verses from Quran and Arabic poetry. Sheikh says that he uses more carving tools, “because they make the work more accurate and aesthetically alluring.”

Sheikh is one of the few woodwork artists who are comfortably versed in both Arabic and English texts. He has mastered the Arabic script called the Racism-ul-Khat very well and this is a rarity that many artists in the woodwork profession do not possess in Kashmir. The majority of the artists who have been drawn into the handwork since the age of 12-15 are usually uneducated and therefore, any artwork that includes letters remains out of their league.

Including the pulpit at Jamia, the grand mosque of Kashmir, Sheikh has beautified many mosques, shrines, and religious places with his mesmerizing Calligraphic artworks in Kashmir valley.

Sheikh says that when he is commissioned to do artwork, he does not only make sure that the work is aesthetically beautiful, but also the writings are selected as well with due care and thought. The current calligraphic art piece that Sheikh is working on contains Surah Alam Nasharah, and it is the 94th clause of the Quran and according to Islamic scripture was send down on the Prophet of Islam to console and comfort him when he was facing criticism and conflict for spreading the Islamic message.

"The words that I select tend to have meaning behind them. They contain a message, a word of love, or compassion, or a promise from God," Sheikh adds.

Kashmiri wood carving is typically done on walnut. The wood due to its durability, stiffness, and texture is considered one of the best woods for carving and Kashmir has an immense wealth of walnut trees that grow at the height of 5500 to 7500 feet above sea level. Kashmiri woodwork artists are known to spend anywhere between two days to three years on single pieces of carvings. There are various styles of carving in which the local artists create fabulously intricate pieces of art.

The first is Khokedar (Undercut) in which the artists tend to create the three-dimensional depiction of various scenes and animals on a wooden background. The second is Jalidaar (Latticework) which is used in bedroom screens and nowadays in the windows too.

The third style of Kashmiri woodwork is Vaboraveth (Deep-carving). In this style, the motifs and designs are raised and the depth of the carved part can go up to 5 inches.

Similarly, Padri and Sadde, which include shallow carving, are the two more styles.

To master the woodwork, artists in Kashmir have to spend anywhere between one to five years with a chisel in their hand under the supervision of a master woodcarver. Initially, instead of the chisel, known as Wathlawun, the novices are handed sharpened flat nails to get hang of the woodwork.

According to historians, Mir Syed Ali Hamdani, a 15th-century Persian proselytizer introduced the woodwork craft, along with various other arts, to Kashmir. In order to take the people out from their back-breaking poverty, Hamdani, on his third proselytizing mission to Kashmir had brought along 700 craftsmen from Iran who taught the local population various crafts.

Woodwork, typically done on Walnut in the Kashmir valley, was also one of those crafts, and soon the Kashmiri artists began to display exceptional talent in the field.

For more than seven centuries, the woodwork, like many other crafts, has been carried forward by the Kashmiri artisans with passion and zeal. Usually, the profession involves certain families or the members of a certain locality who have been into the woodwork for the past seven centuries, but no one is barred from making treads or exits from the trade.

Until the eighteenth century, Islamic motifs, with local renditions of Chinar filigrees and rose bushes, were in the generally accepted taste. However, when the Europeans began to show up in Kashmir, the local artists adopted the crest work to allure the westerners as well. The fish-catching cranes and galloping horses that were fashioned out of brilliant walnut wood must have enchanted the refined white men and women into awe.

Sheikh, being one of the best crest work artists, is also one of the last living woodcarvers who are experts in the genre.

Since the younger generations are disinclined and drawn towards corporate and government jobs, the art of woodwork in Kashmir is dying a slow death.

“The new and educated generation has been reluctant to take the carving profession and wood carving needs the educated people. Most of the people who are currently involved in the woodcarving profession are from the uneducated or traditional class who do not know any kind of scripture or world trends. The result is that Kashmir’s woodcarving is stuck in a traditional cocoon and may soon die a slow death," Sheikh laments.

Nevertheless, Sheikh is optimistic and sees hope in the future. He wishes that the younger generation would come into the profession and take the centuries-old art to new heights.