Islamic Center in Waterloo Vandalized by a Woman 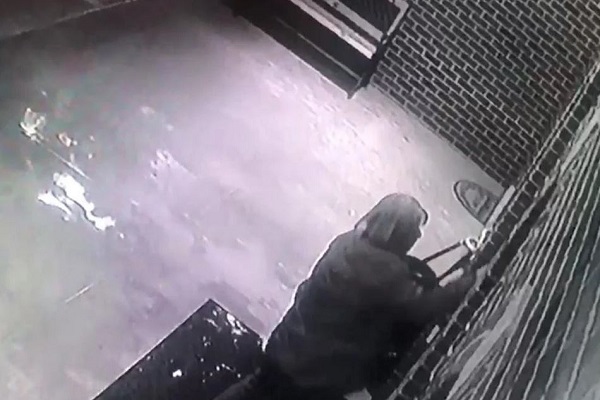 An adult woman steps into the frame of Al-Noor Islamic Community Center's security cameras, picks up some snow, and begins drawing crosses on every window she can reach.

After circling the mosque once, she returns for a second pass -- this time using some kind of oily substance that neither Ahmed Abouzid, Al-Noor's imam, nor others have yet been able to completely clean off. She also escalates from drawing the Christian symbol on a Muslim building to outright hate speech: "F--- Islam," "F--- Muslims," according to Abouzid, who filed a report with Waterloo Police when he discovered it later.

At times, she appears to take photos or videos of her handiwork. Twenty minutes after she began, she's gone.

Abouzid watched her circle the building -- minutes before people began arriving for 7 o'clock prayer -- on his building's security camera footage. She appears to be an older white woman, maybe in her 50s. Her face is plainly visible at times.

Yet, Abouzid said he isn't interested in getting the woman, who he thinks lives nearby because it appears she walked, into serious trouble. Instead, he almost seems to blame himself for her ignorance.

"Do you think that we don't like Jesus? We like Jesus," he said. "We are not an enemy of you."

In fact, just four days before the vandalism, on Dec. 24, his talk at Al-Noor was titled, "Muslims Love Jesus, Too."

"Me, as a Muslim, I love prophet Jesus," Abouzid says in the video, noting that the Quran teaches that Jesus Christ was one of many prophets who came before Prophet Muhammad, all of whom are to be respected and revered. "I must love (Jesus) to have a perfect and complete faith."

So when Abouzid found the damage -- it's not the first time the center has been vandalized -- he immediately thought his non-Muslim neighbors must not know this -- and he should offer a lesson on it to the wider public.

To that end, he plans to hold an event at the center within the next month to teach the community more about his religion. He wants to invite the center's neighbors as well as the wider community.

"Personally, I forgive her," Abouzid said. "We invite her: Just come to learn about us, about Islam."