Social
News ID: 3477594
TEHRAN (IQNA) – An artist is honoring the memory of the victims of the Quebec Mosque shooting through a series of portraits five years after the attack. 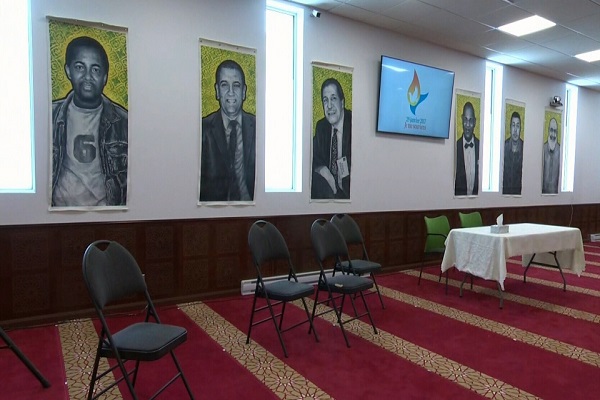 Large scale paintings of the six men killed in the hate-fuelled attack were drawn from snapshots of their lives. Each image reveals a glimpse of what was lost on that January day, when a sacred place of prayer was filled with terror.

"I wanted a way to depict the humanity of the men in a way that was slightly creative, but mostly respectful," artist Aquil Virani told CTV News.

The day after the mass shooting, Virani attended a vigil in Montreal, where he picked up a paintbrush as a way to process his emotions. He began painting and also asked others to complete his work of art with messages of support for the mosque and the victims.

"Ultimately, what I was trying to do in a way I remember was give people a chance to express themselves so that you didn't feel so powerless," he said.

That began a series of events and eventually led the widow of Khaled Belkacemi -- one of the six victims of the shooting -- to ask Virani for a portrait of her late husband.

Belkacemi was a scientist and a university professor and can be seen wearing a suit in his portrait, which was based on a photo taken at a conference three months before the attack -- a photo that his widow holds dear to her heart.

"What struck me was how simple the photo was," Virani said. "…That's where the portraiture comes in, for me. It's to show the humanity, that Khalid Belkacemi was in some ways, just an ordinary guy.”

Eventually the families of the other victims reached out to grant their blessings to paint their loved ones.

"When they had reached out, that's when we really knew that there was interest from them, that we could keep the families at the center of our work," he said. "(We would) ask them what they wanted, ask them for their favorite photos to use, assure them that if at any point they were uncomfortable, for whatever reason, that we would pull that portrait."

The men in paintings, created with acrylic and spray paint, are all seen in front of a similar looking yellow and green background – yellow representing hope and green being an important color in Islam.

"I didn't want to take too many creative liberties when making the artwork, because I wanted to put at the center of the work the faces of the men who were killed," Virani explained.

The six portraits are being displayed at the Islamic Cultural Centre this week before being delivered to the victims' families. They were on display during a news conference at the mosque on Thursday, when community leaders spoke in support of strengthening gun control, fighting Islamophobia and against Bill 21, Quebec's law banning religious symbols for some public servants.

"These very beautiful images give a humanity that goes far beyond the pictures that we see reproduced every year in the in the file photos that get run," vigil organizer Nora Loreto said during the news conference.

Virani says he believes his art can help bring about social change in small steps.

"I don't think we can change the world in a single day, but I think every little bit counts, and humanizing these men, humanizing Muslims in general, goes a long way to making sure that Muslims are treated well and justly in Canada and in the world," he said.