General
News ID: 3478825
TEHRAN (IQNA) – Leader of Islamic Revolution Ayatollah Seyyed Ali Khamenei named Syrian people and government as the ultimate victors of an international war that was waged against them. 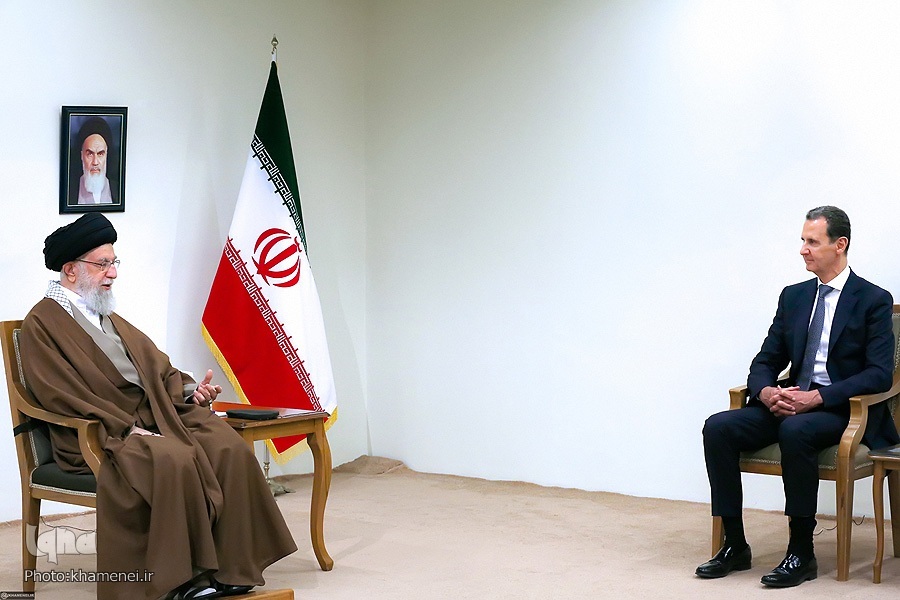 He made the remarks in a Sunday meeting with the visiting Syrian President Bashar Assad in Tehran.

During this meeting, Imam Khamenei maintained that “the Syrian people’s and government’s resistance and victory in an international war has increased Syria's credibility.”

Referring to Syria's great achievements in political and military fields, Imam Khamenei stated, "Syria today isn't the same as before the war. Although this destruction didn’t exist before, Syria's credibility is much more now and everyone views this country as a power."

Emphasizing that today the President and the people of Syria are truly honorable in the eyes of the nations of the region, Imam Khamenei added, "The heads of some neighboring countries meet with the heads of the Zionist regime and have coffee with them. But the people of those same countries fill the streets on Quds day to chant anti-Zionist slogans. This is the reality of the region today."

The Leader of the Islamic Revolution considers several factors to have influenced the resistance and victory of Syria in an international war. He addressed Mr. Assad saying, "Various factors contributed to Syria's victory in the international war, one of the most important of which was your (Mr. Bashar Assad's) strong spirit. God willing, you can reconstruct the ruins caused by the war with that same spirit, because great tasks await you.”

Imam Khamenei also paid tribute to the memory of General Soleimani and said, "Martyr Soleimani was particularly zealous about Syria and truly made sacrifices. His manner in Syria was no different from his manner during Iran’s 8-year Sacred Defense."

He also added, "He (Soleimani) and other prominent members of the IRGC such as Martyr Hamedani viewed the issue of Syria as a duty and holy obligation."

Imam Khamenei emphasized, "The bond and the relationship between Iran and Syria are vital to both countries, and we should not let these relations weaken. Rather, we should strengthen them as much as possible."

Referring to the recent expressions of friendship and kindness of some countries that were in the front against Syria in previous years, the Imam added, "The path in the future should be based on past experiences."

The Leader of the Revolution considers the morale and enthusiasm of the President of Syria to be the foundation for being able to do great things. The Leader said, "The President and government of the Islamic Republic of Iran are also truly enthusiastic and have a strong spirit and determination. They have a serious concern and are very motivated with regards to the issue of Syria. This opportunity should be used to further improve relations between the two countries."

In this meeting, which was also attended by President Hujjat al-Islam Raiesi, Bashar al-Assad thanked the Iranian nation and government for the stance they had taken and for their support. In addition, he commemorated the memory of Martyr Soleimani, and said, "Iran's resistance and firm stance over the past four decades on regional issues, especially concerning the issue of Palestine, showed all the people of the region that the path taken by Iran is a correct path based on principles."

The President of Syria pointed out that, "The destruction caused by a war can be rebuilt, but if foundations and principles are destroyed, they cannot be rebuilt. The Iranian nation's resistance based on the foundations and principles laid down by Imam Khomeini, which has continued with your Excellency's efforts, pave the way for the great victories of the Iranian nation and the people of the region, especially the people of Palestine."

"Some people think that Iran's support of the Resistance Front means supporting them with arms. However, the most important support and assistance provided by the Islamic Republic is its breathing a spirit of resistance [into the region] and its continuing to do so," he added.

At the end, the President of Syria emphasized, "What stopped the Zionist regime from being able to gain control of the region is the strategic relations between Iran and Syria, which must continue with strength."