How Arrogant People Are Portrayed in Quran

Culture
News ID: 3480113
TEHRAN (IQNA) – Arrogance and conceit, which the Quran refers to as Takabbur, are among harmful traits that lead one astray and hinder his path to getting closer to God. 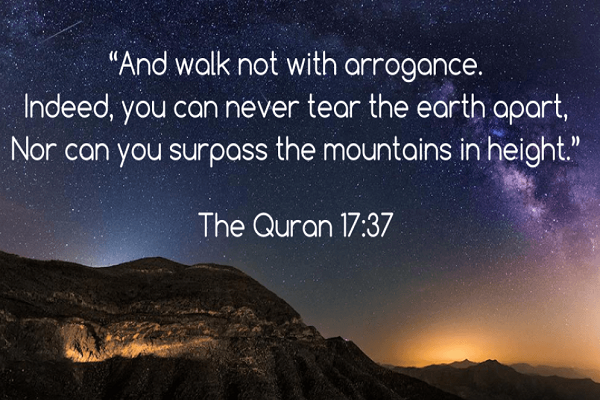 Takabbur, which is the opposite of humbleness, is one of the bad internal traits that has outward manifestations and causes others to be offended.

In another verse of the Quran, God says: “The Lord said, ‘Iblis, what prevented you from prostrating before what I have created with My own hands? Was it because of your pride or are you truly exalted?’” (Surah Sad, verse 75)

Takabbur before God is among the worst kinds of arrogance which is rooted in ignorance and going astray. It sometimes reaches a level in which one sees himself in the position of God. That is what Nimrod and pharaoh, the kings who were contemporaries of prophets Abraham (AS) and Moses (AS), did. They claimed to be divine and both were severely punished.

Takabbur before people is also unacceptable and wrong because, among other things, sets the ground for having Takabbur before God. Any bad trait and any wrongdoing can pave the way for bigger wrongdoings. One who considers himself to be superior to others and lets it manifest in his words and deeds has Kibr (arrogance). This trait sometimes enters one’s heart so stealthily that he himself may not notice it at first.

The real causes of Takabbur are said to be two things: First a feeling of humiliation and second a feeling of superiority that has harmful consequences for one’s heart and soul and conduct. One of them is preventing one from moving toward perfection. For instance, one who is too proud of his knowledge, this pride prevents him from making efforts to gain more knowledge.

1
LIKE
Error Report
Related News
Conceit Opens Way for Man’s Fall
Usury Banned in All Abrahamic Faiths
Malice and Ways to Confront It
Islam Underlines Need to Respect Others’ Rights
Why Aren't All People Guided by Quran’s Verses?
Signs of Corrupt; An Overview
Great Lesson of Imam Hussein’s Movement about Elites
Quran Views Moderation as Key to Reform
Does Existence of Poverty Contradict God's Promise of Providing Sustenance?
Thankfulness to God
Tags: Holy Quran ، arrogance and conceit ، punishment for arrogant ، meaning of Takabbur ، Nimrod and pharaoh
Your Comment