Social
News ID: 3480146
TEHRAN (IQNA) – A group of young Muslim students from Britain and Tanzania has had a tour of Imam Reza (AS) holy shrine’s Physical Education Institute in Mashhad, northeast Iran. 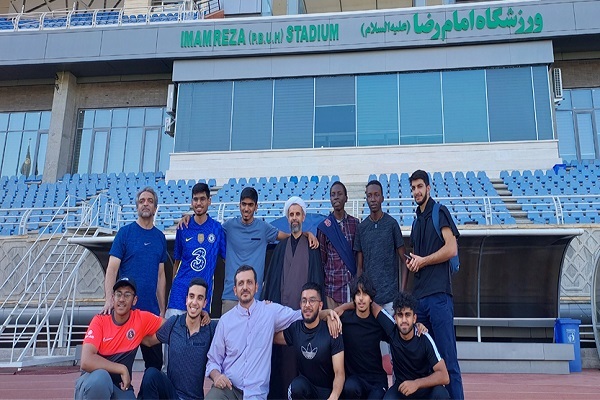 The ten-strong group got familiar with center’s different services and facilities for the public.

Following some detailed and technical information on different facilities of the center given by Mostafa Tabatabaei, manager of Imam Reza Stadium, the group kicked off the tour by visiting Imam Reza Stadium’s different rooms and halls.

In the most equipped football stadium of Iran, curious and delighted members of the group visited VIP section, reporters’ quarter, press room, the pitch, platforms, and locker room of the stadium. The group also received an explanation about construction process and the most important companies involved.

British and Tanzanian students’ tour was continued by visiting most equipped body building gym of the country located beneath stadium’s platforms. Also, gyms of ping pong and martial arts each of which was hosting large number of children practicing their interested fields of sport, were among places that attracted group’s attention.

Muslim Tanzanian and British young men also paid a visit to the special gymnasium for Iranian traditional sports publicly known as Zurkhaneh (house of strength). While influenced by the specific and unique architecture as well as traditional music of the special hall, they had an opportunity to view a practice of young athletes’ show of bodily strength at the hall.

The energetic and full-of-enthusiasm tour of Tanzanian and British young students came to end by swimming at the Physical Education Institute’s pools.

It is worth mentioning that the group enjoyed cultural and educational services of the Islamic Research Foundation in the morning before coming to the Physical Education Institute in the afternoon.