Culture
The link was copied
News ID: 3480664
TEHRAN (IQNA) – A memorandum of understanding (MoU) was inked between Iran and Syria on developing cooperation in cultural fields. 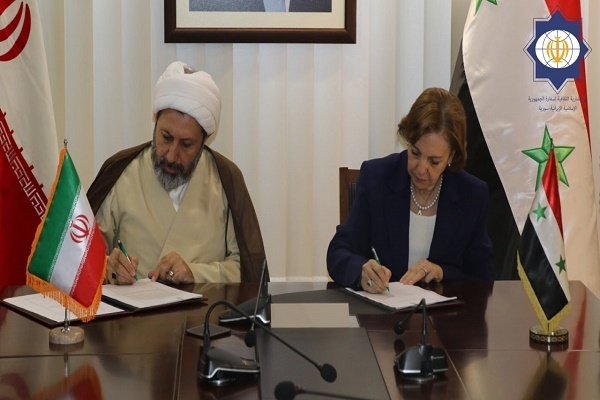 Head of the Islamic Culture and Relations Hojat-ol-Islam Mohammad Mehdi Imanipour and Syria’s Culture Minister Lubanah Mshaweh signed the document in a ceremony in Damascus.

According to the MoU, the two sides will cooperate in such fields as translation of books, cinema, theater, music and teaching Persian and Arabic.

Hojat-ol-Islam Imanipour, who is in Damascus to attend the Iranian Culture Week in Syria, in a speech highlighted the brotherly ties between the two countries and said the MoU will pave the way for further development of the bilateral cooperation.

The Syrian culture minister, for her part, said the agreement will set the ground for the two nations to get familiar with one another’s culture and traditions.

The head of the Islamic Culture and Relations Organization earlier held talks with Syria’s tourism minister on mutual cooperation in different fields, especially exchange of tourism and pilgrimage convoys.