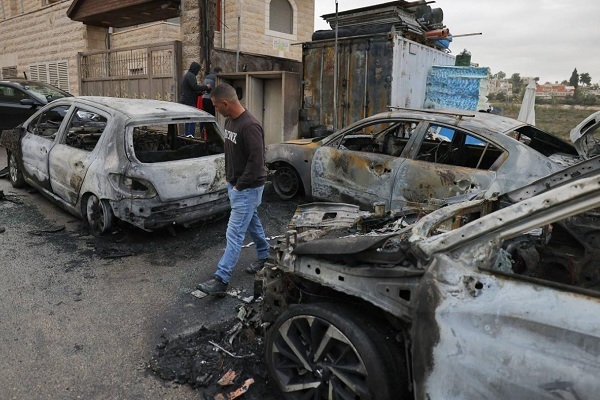 Several Palestinian cars were burned and their tyres slashed by a group of settlers in a string of attacks by a group known as "price tag".

Residents of Abu Ghosh and Ein Naqquba called the Israeli police, the fire brigades and the ambulance after the attacks.

Four vehicles in Ein Naqquba and four others in Abu Ghosh were set ablaze by settlers, who graffitied "Israel people are alive" and "Enough of Arab terror explosions".

Following twin explosions in al-Quds earlier in the week, Israeli settlers had called for protests in the city and revenge, after one Israeli was killed and several wounded in the attack.

Osama Othman, a lawyer and political activist from Abu Ghosh, told Arab48 news that the settler attack on the village was "a cowardly, criminal act carried out by several hateful racists, as they burned four private cars in al-Shorfa area of Abu Ghosh at around 4am, and four other cars in Ein Naqquba. They also wrote racist anti-Arab phrases on the walls."

Abu Ghosh and Ein Naqquba were among the few Palestinian towns spared the Israeli mass expulsion of the Palestinian population in 1948 and are located 13km west of the Old City of Jerusalem.