General
The link was copied
News ID: 3481358
TEHRAN (IQNA) – Palestine’s Islamic Jihad says the crimes made by the Israeli regime in occupied territories will not deter Palestinians from treading path of resistance. 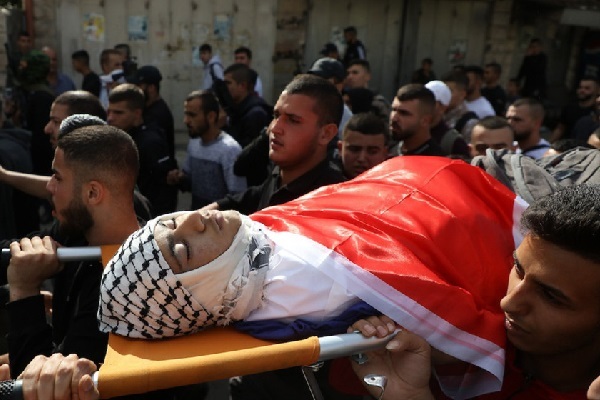 A senior leader of the Palestinian Islamic Jihad resistance movement has denounced the fatal shooting of a Palestinian student during a raid by Israeli forces on the northern occupied West Bank city of Jenin, terming repeated Israeli assaults as a futile attempt to stop Palestinian resistance.

Ahmed al-Modallal said Israeli forces’ and settlers’ recurrent assaults and acts of aggression across the occupied West Bank will never discourage Palestinians from treading the path of resistance.

“Ever since the martyrdom of Izz ad-Din al-Qassam, Jenin has been the scene of Palestinians’ resistance and struggles [against Israel]. The Jenin Brigades is now brandishing the flag of resilience and has evolved from a group to a popular revolutionary movement,” Modallal said.

The high-ranking Islamic Jihad leader emphasized that Israel is now facing frequent crises due to resistance operations and Jenin has turned into a nightmare for the regime.

“In light of the possibility of the formation of a far-right Israeli cabinet, we (resistance forces) are preparing for a fierce battle and confrontation. The resistance front is constantly developing its weapons and beefing up its military might,” Modallal noted.

He stated that resistance fighters are strong-minded to continue their struggle against the occupying Israeli regime and expand their combat capabilities.

“The resistance front has all options on the table to deal with the Israeli enemy. It will never retreat from its path to defend the Palestinian land, nation and their sanctities,” Modallal said.

The Palestinian Ministry of Health said Mahmoud al-Saadi, 18, was killed by the Israeli army on Monday in the northern occupied West Bank city of Jenin. He was shot in the stomach.

At least four other Palestinians were wounded after being shot, according to the ministry and local journalists.

The Palestinian Ministry of Education mourned Saadi in a statement. It said he was a student at the Farhat Hashad Boys Secondary School in Jenin and that he had been killed on his way to school.

Since the start of 2022, Israeli forces have killed at least 199 Palestinians, including 47 children, in the West Bank, occupied East al-Quds and the Gaza Strip.

According to the United Nations, the number of Palestinians killed by Israel in the occupied West Bank this year is the highest it has been in 16 years.