Social
News ID: 1412764
An exhibition of Imam Khomeini’s (RA) works was opened on May ۳۰ by the Iranian Cultural Center in Islamabad, Pakistan. 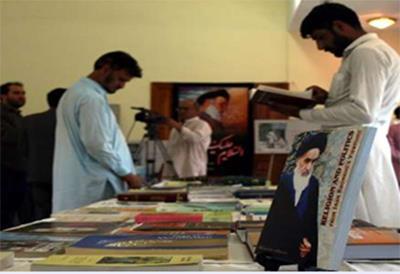 According to IQNA’s branch in West Asia, the exhibition has been organized in cooperation with Jami’at-ol-Sadiq Scientific Center in Pakistan.

Taqi Sadeqi, Iranian cultural attaché in Pakistan, Allameh Seyyed Hussein Abbas Gurdizi, director of Jami’-ol-Reza Seminary and a number of cultural and religious figures of Pakistan were present at the opening ceremony of the exhibition.
Imam Khomeini’s (RA) works in Urdu, English, and Persian languages have been presented at the exhibition.
There are also photos featuring the Islamic revolution in Iran and the Islamic awareness in the world.
The Iranian cultural representative in Pakistan said that the exhibition has been held on demise anniversary of Imam Khomeini (RA). He added that the center plans to hold various mourning programs on the occasion in different cities of Pakistan.
The Pakistani figures also expressed their respect for the late founder of Islamic revolution.
Imam Khomeini (RA) passed away 25 years ago in 1989. He left behind a legacy of Muslim unity and active resistance to oppression, a legacy which continues to resonate with Muslims today.