General
News ID: 1429011
Thousands of People in Norway have taken to the streets of the capital, Oslo, to condemn Israeli strikes on the besieged Gaza Strip and to voice support for Palestine. 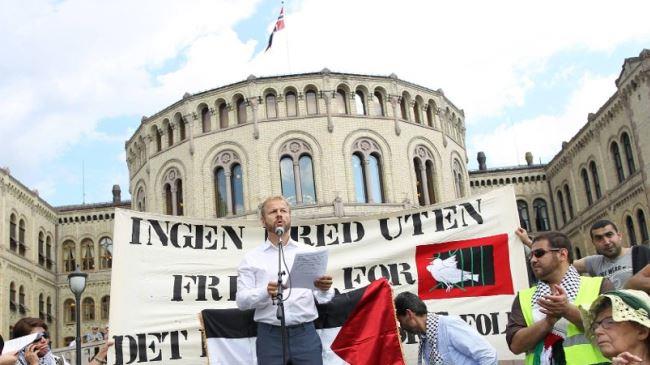 Police said some 3,000 people gathered outside Norway’s parliamentary building on Saturday in support of peace in Gaza.
Representatives from the Palestine Committee of Norway and Heikkie Eidsvoll Holmas, from the Socialist Left Wing Party, gave speeches at the anti-Israel rally.
“There is one occupier and one occupied. There is one offender and one victim,” said Holmas, adding, “We need politicians who condemn the wrong-doings of the offender.”
A similar rally was held in the country’s third largest city, Trondheim, where protesters gathered in the city’s town square to show their support for Palestine.
“We wanted to show our opposition towards the actions that Israel now exposes the Palestinian people to,” said a protester, Venke Aarethun, adding, “Once again, innocent civilians suffer. There are women and children who have to pay with their lives, and it is horrible.”
People in Iran, the US, Jordan, Tunisia, Turkey, France, Indonesia and Britain have also taken to the streets, calling for a halt to the Israeli attacks.
More than 160 Palestinians, most of them women and children, have lost their lives in the impoverished region since July 8. Over 900 others have been also injured in the ongoing deadly air raids.
This is while Israeli tanks have now lined up along the Gaza border, firing into the region. Tel Aviv has also mobilized some 33,000 reservists in preparation for a possible ground incursion.
Source: Press TV