Peace and Justice Are Divine Blessings According to Quran, Bible

General
News ID: 2924605
TEHRAN (IQNA) – According to the Quran and Bible, peace and justice are Divine blessings for mankind, a Christian leader said. 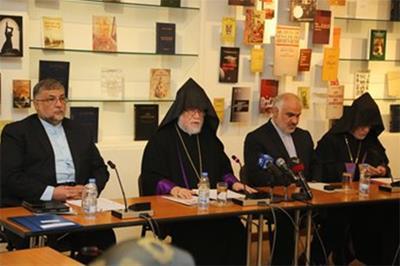 Aram I Keshishian, Catholicos of the Holy See of Cilicia of the Armenian Apostolic Church, made the remark on Tuesday in an address to the 6th round of interreligious dialogue organized by Iran’s Islamic Culture and Relations Organization.

The event was held in Lebanon with the participation of ICRO president Abuzar Ebrahimi Torkaman, Iran’s ambassador to Lebanon, and a number of Iranian Armenian Christians.

Peace in the Middle East was on Tuesday meeting’s agenda.

Keshishian underlined that given these blessings from God, people have no right to resort to violence.

“When we talk about peace, we should also mention justice because peace cannot be achieved without justice,” he stated.

“Today, we see no peace in the Middle East because justice has not been implemented for the Palestinian people.

He further said that Islam and Christianity have common roots and that protecting these roots should be a major priority for both.

Keshishian noted that followers of Islam and Christianity have had good relations, adding that while there may be some ideological differences between the two faiths, emphasis should be put on the commonalities.

Ebrahimi Torkaman, in his address, said promoting moderation is a means for combating religious extremism and violence.

He also underlined that religious leaders should highlight the religion’ call for peaceful coexistence, kindness, compassion and respect for others’ beliefs.