Interview
News ID: 3459146
TEHRAN (IQNA) – The spirit, purpose and principles of Islam can be applied to the issues and challenges facing the modern world and can considerably help tackle such problems.

This is according to Dr. Oliver Scharbrodt, Professor of Islamic Studies at the University of Chester, Britain, who paid a visit to Iran earlier this month to deliver a number of lectures on Islamic studies, Shia Islam in particular, and other relevant subjects from an academic perspective. 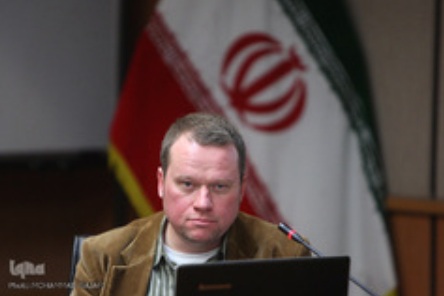 IQNA conducted an interview with the professor on certain challenges and issues facing the Islamic world, notably European Muslims.

What follows is a rough transcription of the first part of the interview.

IQNA: Professor Scharbrodt, at the outset, I would be grateful if you could introduce yourself and give us a brief description of your career, professional activities, and academic studies.

Prof. Scharbrodt: My name is Oliver Scharbrodt. I am professor of Islamic studies at the University of Chester and I am also director of the Chester Centre for Islamic studies. In terms of my research, I work on moderate and contemporary Islam, Muslims in Europe, and Shia Islam.

IQNA: Let’s begin with Islam and its status in the 21st century. Islam and the Muslim world are faced with huge challenges, if not crises. Given the current situation, how do you see Islamic studies in academic centers?

Prof. Scharbrodt: Well, there are many challenges involved. I think that any academic approach to Islamic studies needs to be very much conscious of all the issues and political problems that exist at the moment. But I think there is also an opportunity. If you want to be a bit idealistic, you can say that something bad that is happening is probably an opportunity to turn it into something good. Although we have problems such as sectarianism and terrorism, it has obviously increased interests in Islam as it is an opportunity there to tap into these interests and to promote Islamic studies, and of course to provide a more accurate image of Islam.

IQNA: Statistics suggest that only around 0.2 percent of the global Muslim population are involved in acts of violence, committing crimes in the name of Islam. But this tiny number has brought about grave repercussions to the detriment of the whole Islamic world. In your opinion, in what ways could the problem be sorted out?

Prof. Scharbrodt: It is a huge problem and the solution is not easy. There will be more challenges ahead and I think one thing that is important in the Muslim community, primarily in the European context, is that we have a new generation of scholars that have the traditional training that are deeply embedded in tradition and the knowledge it provides, but they also understand the particular challenges and issues that young Muslims in particular face in the West.

I think in the wider Muslim world the solutions are more complicated because we need to establish societies of which young Muslims feel part, and that empower them and provide them economic, political and educational opportunities. Unfortunately, in many parts of the Muslim world, we are facing autocratic regimes that exclude dissidents, depriving them of opportunities, which in turn lead to a breeding ground for more radicalization.

IQNA: You have conducted studies on modern, contemporary and classical forms of Islam, employing both historical and ethnographic research methods. Your research includes Shia Islam, Islamic messianism and modern Islamic reform as well as the historical and contemporary presence of Muslims in Europe. Given the significance of moderation in Islam, how do you define a moderate Muslim, especially in the current atmosphere where extremism is threatening peace and stability in the entire world?

Prof. Scharbrodt: I am not quite sure whether I am in a position to give a very clear definition of that, but I think what we need in the world today is that Muslim leaders, activists, scholars, and intellectuals should take some kind of spiritual values, moral standards, and social virtues of Islam, have a sense of inception, and see how these values can be relevant to the contemporary world. I am sure that the spirit, purpose and principles of Islam can be applied to the issues and challenges facing the modern world and can considerably help tackle such problems. As I said, I am not sure if I am qualified to define a moderate Muslim but I tried to say what it would mean to be a Muslim in the modern world.

IQNA: According to latest statistics and figures, the number of Muslims in the world is on the rise. From your point of view, what would be the outcomes of the phenomenon to the future of the Islamic Ummah as well as the international community?

Prof. Scharbrodt: The issue can be dealt with from different aspects. There are already challenges to cope with in many part of the Muslim world. There are poor and least developed countries and if the population increases, it puts particular pressure on infrastructures, economic prospect, education opportunities, etc. so it could deteriorate the situation in poor countries. But when observed in the European context, it could be rather welcoming. The Muslim minorities have grown as well.

I think it is a positive development because it questions mono-cultural and simplistic definition of European identity as it adds new dimensions to it. Islam has always been part of European history but he presence of Muslims today in Europe makes us aware again the Europe has a strong historical connection with Islam and the religion has always been part of the continent.

Oliver Scharbrodt is the Professor of Islamic Studies at the University of Chester, UK. He studied Comparative Religion, Islamic Studies and Philosophy at the University of Bonn in Germany and completed his graduate studies and research in London, obtaining his MA and PhD from the School of Oriental and African Studies (SOAS). After teaching in London, the US and Ireland, he joined the Department of Theology and Religious Studies in September 2014.

The same year he was appointed the first Professor of Islamic Studies in the University of Chester as one of the prime centers for the academic study of Islam in the UK. Responsible for teaching courses on Islam, his research interests lie in the intellectual history of modern Islam, the historical and contemporary presence of Islam in Europe and the role of mystical, esoteric and millenarian traditions of Islam in the modern world.

At the moment, professor Scharbrodt is the principal investigator of a research project on Shia communities in Britain and their links to the Middle East. He is also the executive editor of the Yearbook of Muslims in Europe.

"Modern Readings of the Qur’an”, "From Hafiz: Irish Orientalism, Persian Poetry and W. B. Yeats”, "Shaping the Public of Image of Islam: the Shias of Ireland as moderate Muslims”, and "Erin and Iran: Cultural Encounters between the Irish and the Iranians, constitute, among others, some of his works published by globally well-known centers of publications.