Hezbollah to Emerge from Syria War as an International Force

General
News ID: 3460753
TEHRAN (IQNA) – Hezbollah Secretary General Sayyed Hassan Nasrallah stressed on Friday his confidence that Hezbollah will emerge victorious from any Zionist war on Lebanon, highlighting that the divine support and the military preparations enable the Resistance to keep triumphant. 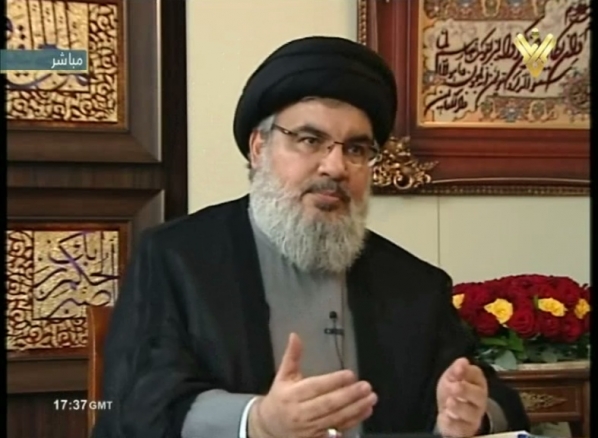 In an interview with Al-Manar TV channel, Nasrallah said that during 2006 war, popular resistance fought one of the most powerful armies in the world and achieved the victory which violates all the natural laws, adding that Holy God supported the mujahidin according to His Promise.

He noted that a large part of the Lebanese government and a number of Arab and regional countries sided with the Zionist entity during 2006 war, providing it with the political, media and military support in order to crush the Resistance.

The military force used by the Zionist entity against Hezbollah in 2006 was larger than that 'Israel' employed during all the Arab-Israeli wars, the Resistance leader added.

Nasrallah pointed out that the Israeli defeat in 2000 marked the first Arab victory which was morally and militarily pure, adding that some Lebanese factions felt sad for the Israeli loss and repeated the same experience in 2006.

"Some Lebanese and Arab sides bet on the Zionist victory in 2006."

The Hezbollah leader said that a European embassy contacted Hezbollah during July's war to assert that only the Lebanese government wanted the Zionist enemy to continue its war against Lebanon in order to defeat the Resistance.

"In 2006 Israel agreed on holding the ceasefire agreement, but some Lebanese factions and Arab regimes insisted on disarming Hezbollah before ending the war. Do they consider Israel as an enemy? Does the dignity of the Umma and al-Quds mean anything to them? They do have different calculations."

Those parties and regimes even deny via their media outlets that Hezbollah defeated Israel in 2006 despite the Zionist acknowledgement in this concern, Nasrallah said.

He added that Hezbollah has been always preparing to face any Zionist aggression, noting the Syrian military support to the Resistance.

Nasrallah stressed that Hezbollah fighters performed their divine duty and the people were confident that the Resistance would emerge victorious, yet that the Zionist enemy was frightened and confused since the beginning of the war.

He clarified that the political system in Lebanon is corrupted adding that the ruling class is corrupted and its components have looted the country's fortunes and desperately preserve their authority positions.

Nasrallah said that after July's war and unlike the victorious parties in the world, Hezbollah did not seek power in Lebanon for that may have caused a civil war which is worse than the political corruption.

He pointed out that the media outlets supported by certain Persian Gulf countries and the West distort Hezbollah image by circulating that the Hezbollah is a group of drug traffickers and money launderers and that the Secretary General's son died at a night club, stressing that the party cares exclusively about the Resurrection Day when the real truths will be displayed.

Nasrallah reiterated Hezbollah's commitment to the national unity and forming a unified government with all the Lebanese factions, including al-Mustaqbal movement because nations cannot be built amid hatred.

He stated that the most remarkable scene during July's war was the people's steadfastness, tranquility and political awareness which made them fantastically go back to their villages on August 14, 2006, which formed one of the basic features of the victory.

"Nowadays, the southerners enjoy peace and prosperity, thanks to the Resistance sacrifices, while the Zionists are building fences along the Lebanese-Palestinian border for their fear of Hezbollah."

People challenged all the threats and courageously went back to their villages, according to Nasrallah who added that God helped them to frustrate the scheme of keeping them displaced.

Nasrallah confirmed that after July's war, he visited the South and Bekaa, adding that he enjoys a normal life as he receives political delegations and friends, and stressing that he is not hiding at a basement.

He noted that Hezbollah commanders and their families as well as all people faced July's war patiently, which assisted them to defeat the enemy.

The Zionist estimations indicate that any Israeli war against Hezbollah would be adventurous and that striking Iran would not be beneficial, so the decision to attack Syria was taken, according to Nasrallah.

"The July war was aimed at eliminating the resistance in Lebanon, Syria and Palestine, and eventually isolating Iran,” Nasrallah pointed out.

He stated that Syria has been targeted for it used to provide Hezbollah with homemade missiles, adopted the Resistance option, and rejected to abandon the Palestinian cause.

"What is going on in Syria is a form of revenge and a continuation of July's war and President Assad is one of the main obstacles that face the US scheme, the New Middle East."

Nasrallah considered that the speech of Donald Trump, the US candidate for presidency, embarrassed President Barack Obama and obliged him to eradicate ISIL.

He said that the Lebanese army stuck to its patriotic creed during 2006 war, sacrificed scores of its soldiers and supported the Resistance in the battlefield, but that PM Fad Siniora wanted the army to disarm and clash with Hezbollah.

"Siniora ordered the army to confiscate the trucks which used to move Hezbollah missiles from Bekaa to the South, revealing that the party's leadership, President Lahoud and Speaker Berri threatened the PM to undo his orders."

"The Lebanese army has all the weaponry, equipment and human conditions to defeat the terrorists in Arsal barrens, but the political decision of the government is not resolute.

"The other party claims that the Lebanese army can confront the Zionist aggression but says that it cannot defeat the terrorists in Arsal barrens."

Nasrallah stressed that the Lebanese army can defeat the terrorists in Arsal barrens, but that Nusra Front has allies in the Lebanese government.

The Hezbollah leader said that the Takfiri scheme cannot survive in the region for it is rejected by all groups, adding that no one can live under ISIL ruling.

Nasrallah emphasized that Hezbollah has gained a vast military experience from Syria war, which frightens the Zionists and will help the Resistance in its Galilee operation.

"If Hezbollah emerged from 2006 war a regional force, it will emerge from Syria crisis an international force."

Nasrallah considered that if Turkey blocks its border with Syria, most of the crisis would be ended as the military and human support to the terrorists would be stopped, adding the pro-terrorism states plan to get rid of all the gunmen after the end of their missions.

"The former Saudi security official Bandar bin Sultan visited Moscow to convince Putin to send terrorists from Chechnya and Dagestan to fight the Syrian army in order to kill them there."

Nasrallah pointed out that the deal according to which the Zionist entity was established includes the Arab kings who are charged with protecting Israel, adding that the Arab militaries have been always powerful, except for the regimes which ban fighting the Zionists.

"If chaos pervades in the region and the Arab regimes collapse, people will certainly wipe out the Zionist entity, liberate Palestine and pray at Al-Aqsa Mosque."

Nasrallah confirmed the solid relations with the Palestinian resistance factions, saying that Palestine is grander than all the other causes.

"I think that the resistance factions cannot accept the normalization of the relations with the Zionist entity."

About Islamic unity, Nasrallah said that the situation is not tragic, noting that what is going on in Syria is not a Sunni-Shia confrontation as scores of those who fight for the army are Sunnis.

"Who liberated Fallujah are the Sunni tribal forces. But the Persian Gulf media has sought classifying the battle as sectarian."

Nasrallah considered that Syria crisis pervades awareness, exposes the mean and prepares the Umma for the major victory of liberating Palestine.

Israel is facing a strategic dilemma after defeating its scheme, according to Nasrallah who expected that the Zionists flee Palestine as they did when they escaped from Lebanon in 2000.

"The US and Zionist schemes will fail to involve the Arab people in confronting the Resistance, which will eradicate the Zionist enemy."

Tackling media siege imposed on Al-Manar TV, Nasrallah vowed to break it, stressing that Hezbollah channel will keep performing its major duties via all the technological means, eliminating the possibility of renaming the outlet due to its symbolic and historical position.