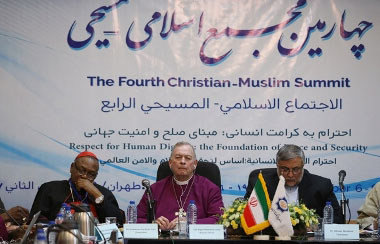 The three-day summit was organized by the Islamic Culture and Relations Organization (ICRO) with the motto of "Respecting and Preserving Human Dignity, Paving the Way for Global Peace and Security”.

Muslim and Christian scholars and thinkers from Iran, Iraq, Lebanon, the US, Switzerland, France, Britain, Hong Kong, Nigeria, Italy, India and the Vatican attended the event.

At the closing ceremony, the participants issued a statement in which they underlined the importance that Sacred Texts attach to love, kindness and compassion for fellow human beings.

They also warned against misinterpreting these texts and exploiting the misconstrued ideas to wrongly justify violence, intimidation and hate.

The statement, which was read out by Hojat-ol-Islam Mohammad Mehdi Taskhiri, head of ICRO’s International Center for Interfaith Dialogue, also condemned desecration of religious sanctities.

Elsewhere, they underlined the need for inclusion of women in inter-religious dialogue, promoting the culture of peace, and defending freedom of thought and religion.

They also called for development of intra-religious and inter-religious dialogue in order for fostering peaceful coexistence in the world.