General
News ID: 3466575
TEHRAN (IQNA) –  President Tayyip Erdogan said on Monday an attack on Turkey’s economy was no different from a strike against its flag or the Adhan (Islamic call to prayer), responding to a recent currency sell-off in stark religious and nationalist terms ahead of a major Muslim holiday. 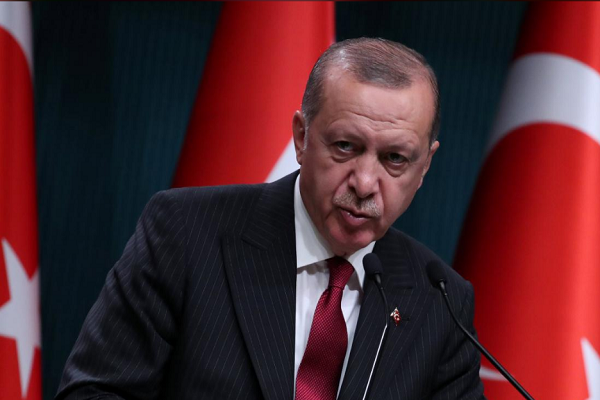 In a pre-recorded address to mark the four-day Eid al-Adha festival, which starts on Tuesday, a defiant Erdogan said the aim of the currency crisis was to bring “Turkey and its people to their knees,” Reuters reported.

The lira has tumbled some 40 percent this year, hit by worries about Erdogan's influence over monetary policy and a worsening diplomatic rift with the United States. The sell-off has spread to other emerging market currencies and global stocks in recent weeks.

Amid the tension, several gunshots were fired on Monday from a vehicle at the US Embassy in the Turkish capital. Nobody was hurt.

“The attack on our economy has absolutely no difference from attacks on our call to prayer and our flag. The goal is the same. The goal is to bring Turkey and the Turkish people to their knees - to take it prisoner,” Erdogan said in the televised address.

“Those who think they can make Turkey give in with the exchange rate will soon see that they are mistaken.”

Erdogan stopped short of directly naming any countries or institutions, but he has, in the past, blamed a shadowy “interest rate lobby”, Western ratings agencies and financiers.

Much of the recent tension has centered around a US evangelical Christian pastor, Andrew Brunson, who has been detained in Turkey on terrorism charges, which he denies.

Brunson, originally from North Carolina, has lived in Turkey for two decades and has become an unwitting flashpoint for the diplomatic rift.

On Friday, a Turkish court rejected Brunson’s appeal for release, drawing a stiff rebuke from US President Donald Trump, who said the United States would not take the detention of the pastor “sitting down”.

The downgrades served to validate prevailing concerns that Turkey “is unlikely to avoid a significant slowdown in economic activity” and that the lira’s fall “poses a risk to financial stability” said Piotr Matys, an emerging markets strategist at Rabobank.

In addition to the lira, Turkey’s sovereign dollar bonds fell and the cost of insuring its debt rose.