Imran Khan Says Pakistan Will Stand with People of Kashmir

General
News ID: 3469539
TEHRAN (IQNA) – Pakistan’s prime minister vowed that his country and nation will not be a bystander to Kashmiris gaining their right of self-determination, official media reported on Sunday. 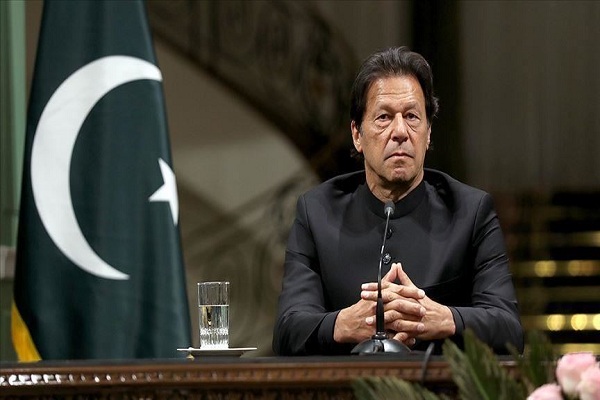 In a guest op-ed in Metro New York on Friday, Imran Khan wrote that it is time for the world community to decide how long economic and political expediencies will continue to overshadow human values and morals, reported state-run Radio Pakistan.

"The Pakistani nation will not sit back until Kashmiris are given their right of self-determination, whatever be the cost,” he said.

Khan reiterated his country’s desire for peace, but peace with honor, and said Pakistan wants to resolve the decades-long dispute over the region, saying that it has “assumed the ugliness of human tragedy.”

Citing the face-off this February with India, spurred by a suicide attack on an army convoy in Pulwama, Indian-administered Kashmir that killed at least 40 Indian troops, Khan said the specter of war was narrowly averted only after Pakistan released a captured Indian pilot for the greater cause of peace.

The "post-Pulwama duel had raised the threat of missile strikes on major Pakistani cities, On Feb. 27, 2019, Pakistan comprehensively displayed not only the will and resolve but also the capability to respond to any kind of Indian aggression," Khan said.

"Make no mistake that our rejoinder to any future hostilities by India will be no different," he warned.

Khan added that Kashmir is no mere territorial dispute, but a “tale of an unfulfilled promise of the right of self-determination to the people of Kashmir,” as spelled out in UN Security Council resolutions.

The reaction of residents of Indian-administered Jammu and Kashmir to the “draconian” clampdown that started there on Aug. 5 may be projected as acts of terrorism, and Pakistan may be blamed, he said.

‘No talks before clampdown ends’

Khan ruled out any negotiation with India until New Delhi reverses the clampdown on Jammu and Kashmir.

"We do not seek to negotiate until the recent unilateral annexation attempt by the Indian government is reversed, curfew lifted and Kashmiri stakeholders are made part of the negotiations," he said.

The people of Kashmir are also looking for international support for their just cause, Khan said.

"How long will the Kashmir dispute simmer as the nuclear flash point between India and Pakistan? What is the likely cost of this apathy and complacency, for not only two countries, the people of Kashmir, but for the world at large?" he asked.

Jammu and Kashmir has been facing a clampdown since Aug. 5, when the Indian government revoked Article 370 of the Indian Constitution, which conferred it a special status.

Hundreds of people, mostly political leaders, have been detained or arrested by authorities since the Indian government made the move.

India has said that 93% of the restrictions have been eased in the conflict-ridden region.

Arriving back in Islamabad on Sunday after a week at the UN General Assembly in New York, Khan said if even the world does not stand with the Kashmiri people, his country always will, in remarks carried by state-run Pakistan Television.

"The Kashmiri people are looking towards us and we will stand with them," he vowed.

His return was delayed from Saturday due to a technical malfunction with the plane.

Criticizing the “anti-Muslim agenda” of his Indian counterpart Narendra Modi, Khan said soon or later Kashmiris will achieve their goal of freedom.