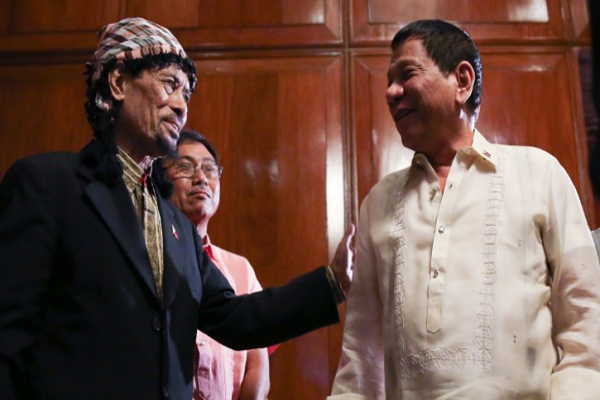 The Office of the Presidential Adviser on the Peace Process (OPAPP) confirmed the news Saturday after President Rodrigo Duterte and Misuari met in Davao Friday night.

“In order to accelerate the implementation of the peace agreements and to develop further the support of the Islamic countries, President Duterte announced the appointment of Misuari as Special Economic Envoy on Islamic Affairs to the OIC,” said OPAPP.

“Most of the leaders of the OIC are friends of Nur. It’s good that Allah has given you (Misuari) a longer life to see these things because I do not think that there is other Moro personality that could command the respect and trust of the OIC but only you,” said Duterte during the meeting, according to OPAPP.

The two have met at least thrice this year. In November, they decided to create a peace coordinating committee that would help in “combating the Abu Sayyaf Group and convincing MNLF relatives to return to the folds of the law.” The meeting in Davao was the first time the committee convened.

Misuari “gladly received” the position. He is set to attend the annual meeting of the Parliamentary Union of the OIC Member States in Burkina Faso in Western Africa on January 21 to 23, 2020.

The Sandiganbayan allowed Misuari to travel abroad for this year’s Parliamentary Union meeting in the United Arab Emirates in February and a trip to Morocco in March.