General
News ID: 3470413
TEHRAN (IQNA) – The second edition of an international conference titled “American Human Rights in View of Leader of the Islamic Revolution” is underway here in the Iranian capital on Tuesday. 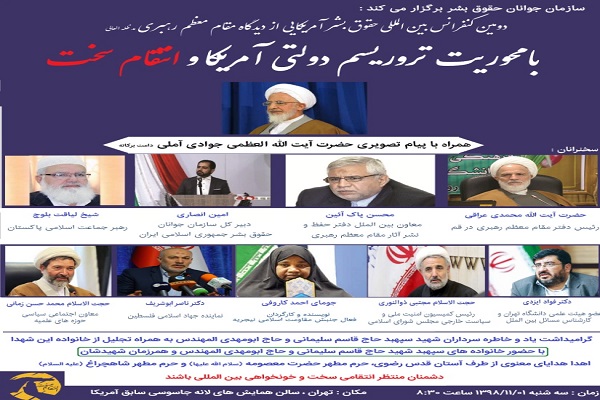 The main theme of this edition is “harsh revenge” and the US’ state terrorism.

The conference began at the former US embassy in Tehran, known as the “Den of Espionage” this morning, with message from prominent Iranian cleric Ayatollah Abdollah Javadi Amoli, in which he said a large number of Quran’s verses revealed in Mecca, known as Makki verses, are about human rights.

Ayatollah Javadi Amoli also expressed hope that Islamic human rights would be promoted in the world.

Mohsen Pakayin, international deputy of the Institute for the Publication of Ayatollah Khamenei’s Works, was the first speaker at the conference. He referred to examples of state-sponsored terrorism and said the US government and the Zionist regime of Israel are the epitome of this kind of terrorism.

He referred to the atomic bombings of Japan’s Hiroshima and Nagasaki, illegal invasion of Afghanistan and Iraq, and support for terrorist groups like Al-Qaeda and Taliban as instances of the US’ state terrorism.

The latest act of terrorism committed by Washington was the assassination of Iranian top commander Lt. General Qassem Soleimani and his companions in Baghdad, he added, stressing that it was an illegitimate move and in blatant violation of international laws.

The conference has been organized by the Youth Human Right Organizations with the participation of experts and thinkers from Iran and a number of other countries.