Rallies Held in US against Anti-Muslim Violence in Delhi

General
News ID: 3470790
TEHRAN (IQNA) – Hundreds of Indian Americans of different faiths rallied outside Indian consulates in major American cities on Friday evening to protest against the recent violence in Delhi that has killed at least 42 people, and injured hundreds. 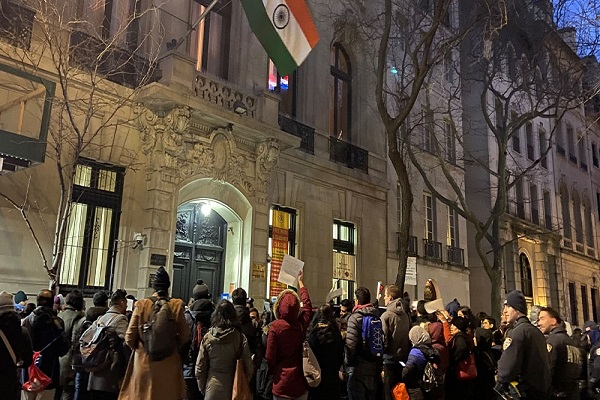 Violence erupted in the Indian capital on Monday, leading to a three-day-long rampage, with Hindu mobs attacking Muslim homes, shops and mosques. The attacks were carried out on protesters, who have been rallying against a new citizenship law, after the ruling Bharatiya Janata Party (BJP) leader Kapil Mishra threatened peaceful sit-ins would be removed from the streets.

The CAA passed last December has been compared to US President Donald Trump's Muslim ban as it blocks naturalization for Muslims, who form nearly 15 percent of India's 1.3 billion population.

More than 30 people have been killed in a harsh police crackdown on nationwide peaceful sit-ins against the "anti-Muslim" law.

Outside the Indian consulate in New York on Friday evening, protesters gathered chanting "Shame!" at officials as they tried to exit or enter the building.

"We are exhausted," Sana Qutubuddin, an activist with Alliance for Justice and Accountability - a coalition of South Asian groups that organized Friday's rally alongside the Indian American Muslim Council, South Asia Solidarity Initiative, and Equality Labs - said during her speech at the rally.

Other civil society organizations such as the Alliance for South Asians Taking Action, Chicago Against Hindu Fascism and Bay Area Against Hindu Fascism also protested against the worst violence in Delhi since 1984, when more than 3,000 Sikh minority were killed following the assassination of then-Prime Minister Indira Gandhi.

"I was there to have an opportunity to grieve with a community that understands how egregious the genocidal violence that occurred in Delhi was," Qutubuddin told Al Jazeera, "and to be in a space that recognizes what this moment means in modern Indian history."

Organizers estimated nearly 300 people turned up at the New York rally where they chanted slogans to repeal the CAA, and highlight the current BJP government's "fascist" ideologies that target lower-caste Hindus and other religious minorities.

The BJP's ideological parent is Rashtriya Swayamsevak Sangh (RSS) - a Hindu paramilitary supremacist organization inspired by European fascists and Nazis - which has called for India, an officially secular nation, to be declared a Hindu Rashtra or nation of Hindus.

At the New York rally, protesters played music, and rallied around the block "to let the neighbors of the consulate know that their silence makes them a party to genocide," said one of the organizers.

For many Indian Americans, showing up at the protest was all they felt they could do.

"I grew up in an idyllic idea of a secular India and I'm completely devastated to see everything that I thought would happen in India is happening under the Modi government," Ishita Srivastava, who has been living in New York for 12 years, told Al Jazeera.

"Being here is all that I can do," she added. "I think it's a very systematically fuelled bigotry and state-sponsored and supported violence and there's clearly an appetite for rabid divisiveness and bigotry and it's exacerbated by the fact that we have a deeply unequal society."

The protests - from San Francisco to Chicago and Atlanta - were brought together by organizers who identify as multi-faith and/or inter-faith and inter-caste collectives.

Earlier in the week, an estimated 50 people gathered at Harvard University in Boston, immediately after the Delhi violence began.

In Chicago, organizers said teachers, IT professionals, senior citizens were among the hundred protesters who came out on Friday.

"Attendees were reminded that this state-sanctioned violence is consistent with Indian history - citing the murders of Muslims in Gujarat [in 2002] and the Sikh genocide in 1984, as well the constant violence enacted on Dalits [the former untouchables] within caste oppression." Jihan, one of the organizers in San Francisco, told Al Jazeera. They estimated about 100 people showed up for the protest.

Police in Delhi have been accused of looking the other way as Hindu mobs attacked Muslim homes while in many cases they were found to be complicit in the assaults.

An estimated 80 people showed up at Friday's protest in Atlanta, organizers said. A protester with "Atlanta Rejects CAA", who did not wish to be named, told Al Jazeera that members from the consulate took photos of protesters and tried to intimidate them by taking their names.

One of the organizers criticized Trump, who has been accused of endorsing white supremacists in the US, for backing Modi's "fascist" agenda.

At a news conference in New Delhi on February 25, Trump defended Modi on religious freedom and refused to comment on the CAA while parts of the Indian capital burned.

"The meeting of Trump and Modi during a pogrom and for Trump to basically gaslight all of the concerns that millions of Indians are protesting, that's a sign of how they're cooperating and reinforcing their vision of a fascist world order," Thenmozhi Soundararajan, executive director of Equality Labs in New York, said.

Many expressed their concern that the violence has been normalized into the fabric of Indian society, especially under Modi.

Qutubuddin from Alliance for Justice and Accountability said that many Hindus have been caught up in "hateful rhetoric" pushed by the Hindu nationalist government.

The Indian consulate in New York did not respond to repeated requests from Al Jazeera for comments.