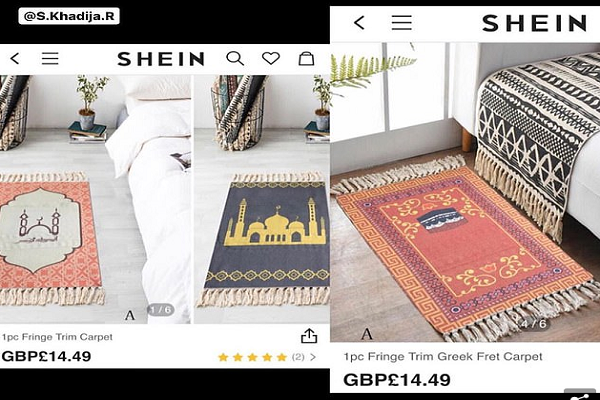 Many of the mats had pictures of mosques and the Ka’aba – a black cube located in Mecca which is Islam’s holiest site.

The designs were first noticed by journalism student Khadija Rizvi, who posted screenshots that went viral on Instagram.

Since others also complained to Shein and said they’d be boycotting the brand, Shein has issued a public apology. Posting on its Instagram, the brand said: ‘We’re sorry. As a global brand, we vow to do a much better job in educating ourselves on different cultures, religions, and traditions to ensure our diverse community is respected and honoured.

‘We offer our sincerest apology to all whom we have hurt and offended and hope we can earn your forgiveness.’

The statement comes after several calls for Shein to remove the data-x-items from their site. Beauty vlogger Nabela Noor also called on the brand to do something and personally got in touch with them.

In her original viral post, Khadija wrote: ‘I am disgusted. I am livid. Shein is profiting off Muslim prayer mats (janemaz/sajadah) by selling them as “fringe trim carpets” for people to use casually around the house.

‘A few have the Ka’aba printed on them. THIS IS HIGHLY OFFENSIVE, not only is it disrespectful but they once again renamed and stole credit from a whole faith this time, by failing to label it as a Muslim prayer mat which allows people to use it casually as a decorative mat.’

Khadija pointed out that in Muslim households, you would only use prayer mats for worship, not decoration, and would not step on them with shoes.

She added: ‘A prayer mat is an important piece of fabric, used by Muslims, placed between the ground and the worshipper during their five daily prayers. It is NOT a carpet and must be treated with respect and you don’t ever wear shoes on it.

‘It’s important for us to acknowledge the disrespect that is committed here.’