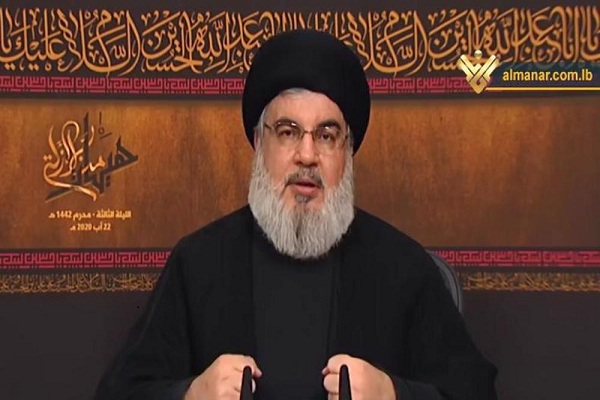 Sayed Hassan Nasrallah made the remarks during a televised speech late Saturday on the third night of the mourning month of Muharram.

He said that Hezbollah considers it a duty to defend Lebanon and the nation if they are attacked.

According to Islamic values, he added, it is obligatory to help all human beings regardless of their affiliations while geographical and political borders must never be a barrier in this regard.

“It was Hezbollah’s duty to fight Daesh in Syria and Iraq in order to prevent it from achieving any victory and expanding [the so-called] caliphate into other regional countries,” he said.

Nasrallah further emphasized that Hezbollah will never abandon delivering on its responsibilities in Lebanon and the neighboring countries, adding that the group takes into consideration Lebanon’s national interests.

He also condemned Washington’s political meddling and military intervention in most of the world countries.

“The United States wages war and holds a right for itself to crush the bones of innocent children in Yemen and elsewhere, but no one can say a word condemning its aggression," Nasrallah said.

“Why do you hold the right to interfere in the affairs of countries and initiate a war, but we and others do not have the right to extend a helping hand to the countries whose rights have been violated?” he asked addressing American officials.

As the Lebanese ask all the world countries for assistance during disasters and wars, they must not reject that some Lebanese groups help certain Arab countries in the region, including Syria, Iraq, Palestine and Yemen.

Hezbollah was established following the 1982 Israeli invasion and occupation of southern Lebanon.

Since then, the resistance movement has grown into a powerful military force, dealing repeated blows to the Israeli military, including during a 33-day war in July 2006.