General
News ID: 3473205
TEHRAN (IQNA) – A program was broadcast on a Ugandan TV station featuring discussions on the obstacles to unity among Muslims. 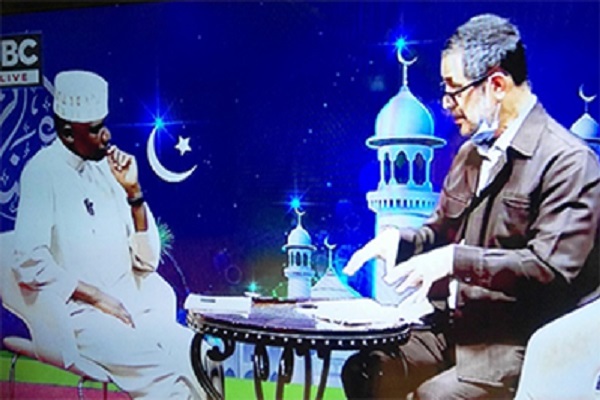 According to the Islamic Culture and Relations Organization, the Islamic section of the UBC TV produced the program in cooperation with the Iranian Cultural Center in Uganda.

Mohammadreza Qezelsofla, the Iranian cultural attaché in the African country, and Rasheed Kiwanoka, director of the section, media secretary of the Office for Uganda’s Mufti and the Supreme Council of Uganda Muslims participated in the live program.

The scholars discussed the obstacles to Muslims unity, status of unity in development of the Islamic Ummah, necessity of informing Muslims about the importance of unity, enemies’ plots and their reasons and the need for promoting the Muslims knowledge based the Holy Quran’s verses and guidelines of Imam Khomeini (RA) and the Islamic Revolution’s leader.

The Iranian official said that any extremist thought which leads to division among Muslims is prohibited according to the Holy Quran and the Seerah of the Prophet of Islam (PBUH).

The African figure said in his turn that the teachings of the Holy Quran and the Holy Prophet (PBUH) have nothing to do extremism and that respecting each other, observing Islamic ethics and studying the history of Islam and knowing the enemies of Islam and their plots are important factors in strengthening Muslims unity.

He added that Takfiri thoughts, which are contrary to the Nabawi Sunnah and teachings, are the most dangerous challenges faced by the Islamic Ummah.