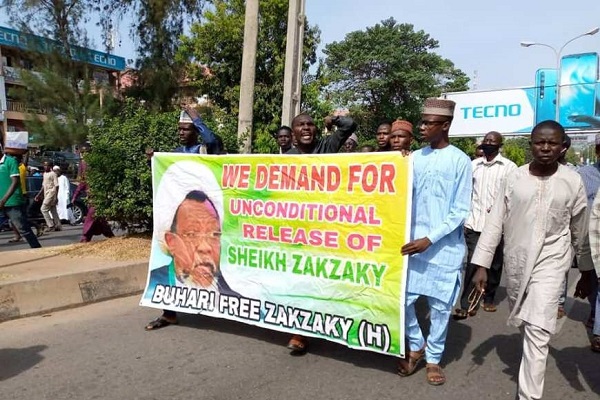 The rally was held on Tuesday in protest at the continuation of Sheikh Zakzaky’s illegal detention.

The demonstrators carried banners and placards and chanted slogans in his support.

They demanded the immediate and unconditional release of the head of Islamic Movement in Nigeria (IMN).

The cleric’s trial has reportedly been adjourned to January 2021.

The top cleric and his wife have been in jail since December 2015, when the Nigerian army launched a deadly onslaught on his residence in the northern town Zaria.

Authorities have transferred the sheikh and his wife to a prison in the state of Kaduna.

Their health has been deteriorating in prison.

Sheikh Zakzaky, who is in his mid-sixties, lost the sight of his left eye in the 2015 raid by security forces, that left more than 300 of his followers and three of his sons dead. His wife also sustained serious injuries during the raid.

According to human rights groups, Nigerian forces have killed at least 400 members of the IMN over the past four years.