General
News ID: 3473283
TEHRAN (IQNA) – Uncle Sam always exposes his agents, pulling them into his bed in the dark of night, then exposing them in the bright light of day. That is the nature of the dirty tricks played by shadowy government agencies in Washington and their allies. 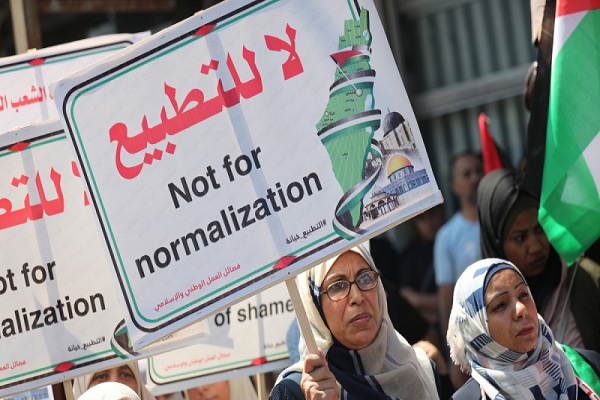 Hence, it was no great surprise that the Israelis revealed details of the meeting in Neom between Saudi Crown Prince Mohammad Bin Salman and Israeli Prime Minister Benjamin Netanyahu, in the presence of US Secretary of State Mike Pompeo. What was unusual is that Saudi Arabia denied it, so Israel exposed it even further in the international media to silence the Saudis and their miserable attempts to cover up for their de facto ruler, removing his final vestige of a fig leaf.

This was not the first time that Bin Salman has met Netanyahu and other Israeli leaders. It has happened many times. The cameras caught the prince's aircraft at Ben Gurion Airport when he visited Israel in 2017, for example. On that occasion, Saudi Arabia neither confirmed nor denied a meeting.

Donald Trump's imminent departure from the White House scares Bin Salman because he knows that, despite blackmailing him and taking billions from the Saudi treasury, he is more merciful than President-elect Joe Biden, whom he fears. He is afraid that Biden will open the Saudi human rights file and the case of murdered journalist Jamal Khashoggi. The prince is the main suspect in Khashoggi's murder in the Saudi Consulate in Istanbul on 2 October 2018; it is believed by many that he gave the orders. The Turkish intelligence agency gave the CIA audio tapes recorded inside the building, but Trump has protected him from being held accountable.

That is why Bin Salman has turned to Netanyahu to smooth the way for when Biden takes office in January. Biden hasn't been particularly kind towards the Kingdom, not least due to its intervention in the war in Yemen. There will, of course, be a price to pay, and Netanyahu will extract it. Normalization and the establishment of diplomatic relations between the Kingdom and Israel is only a matter of time. They have had communication channels open for years, and meetings between Saudi and Israeli officials take place in secret. Moreover, it was Saudi Arabia that pushed Bahrain and Sudan to normalize relations, and blessed the UAE's move in that direction.

With his father turning 85 next month, Bin Salman had hoped that he would ascend the throne while Trump was still US president with his son-in-law Jared Kushner in tow. They have been his biggest supporters, but now his hopes rest on Netanyahu to fulfil his ambition.

The rush of some Arab countries to normalize relations with Israel has not been accepted by the ordinary people in the region. This worries Israel, so it pushed a popular Egyptian actor and singer, Mohamed Ramadan, to normalize with Israel and whitewash its image. The plan was to drag his fan base with him, many of whom probably have little knowledge of politics.

Israel left the direction of this plot to its loyal ally the UAE. Ramadan was flown by private jet for the opening party of a branch of an Emirati company in Dubai. He did not disappoint, as he danced to Israeli folk song "Hava Nagila" and happily hugged Israeli singer Omer Adam. Pictures of this were posted on social media, and turned his world upside down in Egypt. Under intense pressure from a public angry at the violation of Egyptian taboos in Dubai, a series in which Ramadan was starring in, scheduled to be broadcast during the month of Ramadan, was cancelled. A well-known telecommunications company stopped broadcasting a new commercial that he had filmed, fearing that it would hurt its business. Moreover, the Union of Artistic Syndicates decided to suspend him from work and the Journalists Syndicate issued a statement calling for his name and photographs to be banned in newspapers, with a warning that any violation will be subject to union action.

This was the angry reaction to the photographs taken at the Dubai party, while Israel celebrated them. This was not a prelude to a warm peace after four decades of "cold peace". In fact, the stunt has had the opposite effect, with Ramadan turned into a high profile warning to others that this could happen to them if they follow his example. The Zionists seemed shocked by the reaction, as they rediscovered the extent of the hatred that ordinary Egyptians feel for the racist state of Israel and the extent of their support for the Palestinian cause.

The message was received loud and clear: despite peace agreements, the Egyptian people reject normalization. This was and remains the popular position in Egypt and there is no way to disguise it under the name of "warm peace" or whatever.

The popular Egyptian response poured cold water on the official (Persian) Gulf heat, reflecting the reality of the normalization deals. They are nothing to do with peace, but are actually shallow political arrangements between Zionist Arab regimes and Israel.

We are at a crossroads, and the policies and alliances are too dangerous to be attributed to an actor who does not know the history of his country or the truth about what is happening around him. Like it or not, Bin Ramadan, it is going to determine your future. You cannot separate Bin Salman's betrayal from yours.