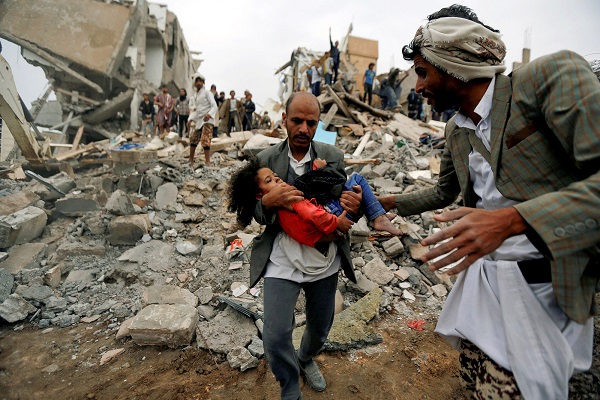 Shortly after, Biden’s Secretary of State Antony Blinken reversed Pompeo’s unwise decision vis-à-vis Ansarullah, allegedly to avoid obstructing the delivery of food and medicine to the Yemeni civilians who are being starved to death in the Saudi-orchestrated holocaust. Heavy airstrikes by the Saudi-led coalition rip through the Yemeni major cities daily for the past 6 years and the American officials, both democrats and republicans, gave the green light for it. So what changed the American pro-Saudi approach in Yemen?

Ironically, under Obama and Trump’s administrations, the White House supported a Saudi-led coalition against the Yemeni legitimate government. The protracted conflict in Yemen and the Saudi callous bombardments have massacred tens of thousands of Yemenis and brought the entire nation to the verge of famine and starvation.

During Obama’s presidency that claimed to advocate human rights in all parts of the world, Washington was the primary supplier of arms to Saudi Arabia. The flood of US weaponry exacerbated the humanitarian situation and helped the Saudi despotic regime to kill thousands among them children on school buses and families fleeing violence.

The civil war began in 2014 between the mercenaries loyal to Abdrabbuh Mansour Hadi, a Saudi protégé, and the Yemeni pro-democracy Ansarullah revolutionaries. Vying to restore the deposed president Mansour Hadi, Riyadh and a handful of other reactionary Arab regimes backed by the US and Israel launched a merciless onslaught against the Yemeni civilians, hitting schools, hospitals, and refugee camps.

Embroiled in a years-long American-Saudi-Israeli genocide, the Yemenis firmly believe that the reasons behind Biden’s decision to revoke Ansarullah terrorist designation is not the moral guilt and sense of complicity of American leaders in Washington or American apathetic public opinion, rather, it is an assiduous effort to extricate the United States’ closest ally in the Middle-East, Saudi Arabia, from the Yemeni quagmire.

In other words, Biden seeks to put an end to Saudi Arabia’s miserable fiasco in Yemen by making insincere humane gestures to soften the blow of reality. But no matter how masterful Biden’s chicanery, the Yemeni humanitarian crisis shall remain an indelible stain on the United States foreign policy record.

The Yemeni nation is optimistic because they rely only upon God to achieve peace and prosperity and not this or that American phony peace initiative.