General
News ID: 3474020
TEHRAN (IQNA) – A massive famine in Yemen could wipe out fresh peace efforts in the impoverished country, which has been suffering from a brutal war imposed by Saudi Arabia for the past six years, top UN officials warned. 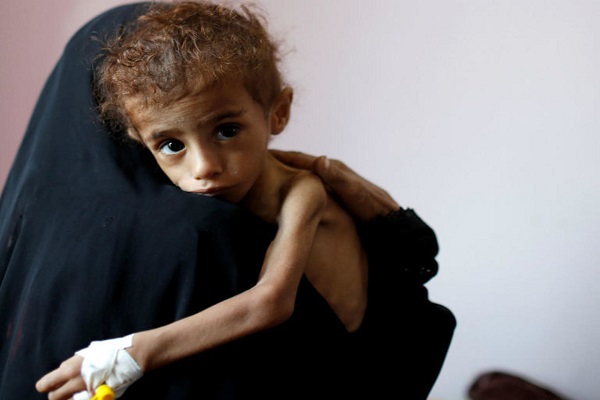 He warned that the offensive would threaten “all of the prospects of the peace process.”

Earlier this month, Yemen's army soldiers and their allied fighters from Popular Committees resumed an offensive to take control of oil-rich Ma’rib, Hadi’s last urban stronghold in northern Yemen, which is some 120 km east of the capital Sana’a.

New American President Joe Biden claims that ending the conflict in Yemen is a priority for his administration, appointing a special envoy on Yemen and reportedly ending US support for offensive operations by Saudi Arabia.

“International support for ending the conflict is indispensable, and this offers us a new opportunity to reopen space for a negotiated solution,” Griffiths told the 15-member UN Security Council, Press TV reported.

“There’s an important opportunity right now to help Yemen move towards lasting peace ... but that opportunity will disappear, it will be wasted, if Yemen tips into a massive famine,” the UN's head of humanitarian affairs and emergency relief Mark Lowcock told the Security Council.

He said that around $4 billion is needed in the current year to fund humanitarian operations as Yemen is speeding towards the worst famine the world has seen in decades.

Lowcock further said that about 16 million people in Yemen are going hungry and five million of those people are “just one step away from famine.”

Saudi Arabia and a number of its regional allies launched a devastating war on Yemen in March 2015 to bring Hadi, a staunch ally of Riyadh, back to power and crush the popular Ansarullah movement.

Yemen's popular forces, however, have gone from strength to strength against the Saudi invaders, leaving the Saudi-led coalition forces bogged down in Yemen.

At least 80 percent of the 28-million-strong population in Yemen is reliant on aid to survive in what the UN has called the world’s worst humanitarian crisis.

UN agencies have already warned that around 400,000 Yemeni children aged under five are in danger of losing life this year due to acute malnutrition.