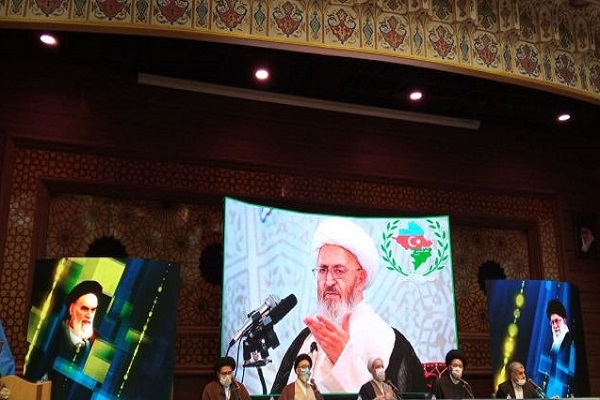 “Since the very first days the borders of the former Soviet Union were opened to Iran, the Islamic Republic has always stood by the people of Azerbaijan and supported the cultural, scientific and religious interactions between the two countries,” he said in a message to an international conference on the Karabakh conflict.

The conference was held in the holy city of Qom on Monday. Iranian and international experts addressed the event from different aspects, including the humanistic responsibilities over the issue of Karabakh that have been highlighted in the remarks of the Leader of Islamic Revolution Ayatollah Seyed Ali Khamenei.

Ayatollah Sobhani further said the Nagorno-Karabakh region has long belonged to the territory of Azerbaijan and, therefore, its occupation is illegitimate, and the occupied territories must be returned to Islamic countries and parties must adhere to international treaties.

“I was informed that Wahhabis have been investing in this sensitive area for years, be careful that this region does not become the center of Wahhabism and Takfiri terrorist groups,” he said, according to Mehr news agency.

“As Shiism in this region has a long history, enemies of Islam have focused on the region, and they are hostile for the religion and independence of this country, so beware of their conspiracies and mischief.

In liberated areas, treat Armenians with Islamic morality so that they are not bothered by you.”

The war in Nagorno-Karabakh re-erupted in late September 2020 between Armenia and Azerbaijan, becoming the worst fighting in the region in decades.

The two sides signed a ceasefire agreement to end the conflict in November 2020.

Under the agreement, Yerevan and Baku agreed on November 9 to end hostilities under a Moscow-brokered deal that secured territorial advances for Azerbaijan in Karabakh and seven surrounding districts.

Nagorno-Karabakh is internationally recognized as part of Azerbaijan but has been populated by ethnic Armenians.