General
News ID: 3474303
TEHRAN (IQNA) – The coming of the spring is celebrated in Iran and several other countries as the beginning of the new year. 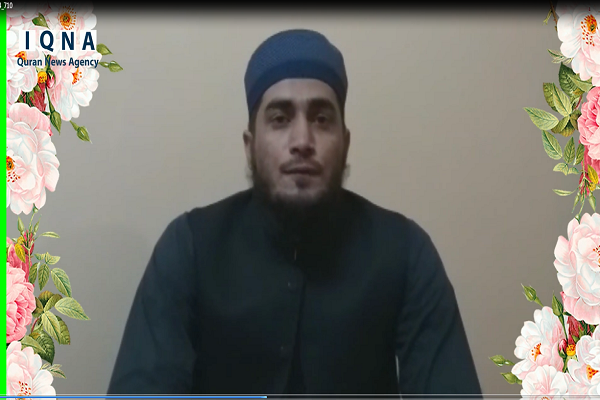 On this occasion a number of prominent international Qaris have contributed to an initiative launched by IQNA that includes recitation of verses from the Quran featuring the spring, creation and the nature.

In the following footage, Pakistani Qari Abdullah Khaled recites verses 96 to 100 of Surah al-Baqarah (2) of the Holy Quran:

“Indeed, you will find them more eager than other people for this life. And (more than) those who disbelieve. Each one of them wishes to live a thousand years. But his prolonged life will surely not remove him from the punishment. Allah is the Seer of what they do.

Say: 'Whoever is an enemy of Gabriel, indeed, he has brought it down by the permission of Allah to your heart, confirming what was before it and a guidance and glad tidings to the believers.

Whoever is an enemy of Allah, His Angels, His Messengers, Gabriel, and Michael indeed Allah is the enemy of the unbelievers.

We have sent down to you clear verses, none will disbelieve them except the evildoers.

Why, whenever they make a promise do some of them cast it aside! Most of them do not believe.”

The Persian New Year, Nowruz, began on Saturday on the last day of winter, as Iranians, and many people in other countries in the region like Tajikistan, Afghanistan, Azerbaijan, Kazakhstan, Kyrgyzstan, Turkey, and Turkmenistan, are celebrating the beginning of spring.

In harmony with the rebirth of nature, the Nowruz festivities began on the last day of solar year 1399, which fell on March 20 this year.

Sunday (March 21) marked the first day of the New Iranian Year in the solar calendar.