General
News ID: 3474339
TEHRAN (IQNA) – Zionist settlers escalated their daily raids into the al-Aqsa mosque compound in occupied Jerusalem al-Quds in the last couple of days during their celebrations of one of the Jewish holidays known as “Passover”. 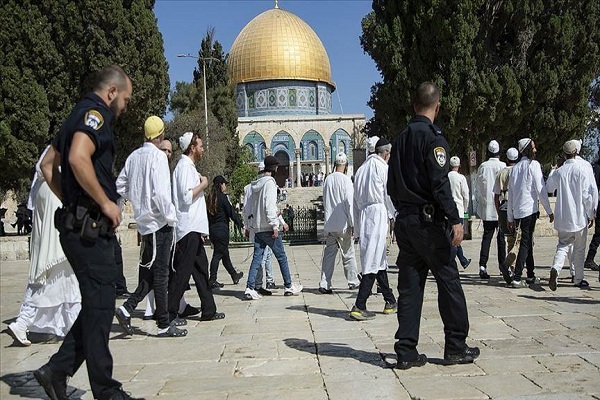 On Thursday alone, hundreds of Israeli settlers raided the holy site under the protection of Israeli forces, according to the Muslim religious authorities, or what’s known as the Awqaf, which administrates the compound.

Israeli settler groups have called on their supporters to converge on the al-Aqsa Mosque compound in celebration of Passover, which began on March 27 and lasts until April 3.

Thousands of Israeli soldiers were deployed across Jerusalem al-Quds to provide protection to settlers who toured, in groups, the al-Aqsa mosque compound and took photos of several places. Other strict measures were also taken on Friday to prevent Muslims from reaching the mosque. Experts believe the incursions are part of Israel’s policy to Judaize the holy site and expel the Palestinians out from the holy city.

Since its occupation of the Palestinian lands, Israel has been launching violent crackdown on Palestinians in different ways, especially when it serves Tel Aviv’s interests.

During the Jewish holidays, Israeli settlers escalate their raids into the al-Aqsa mosque compound. Palestinians say the raids are provocative and pursue the policy of suppression by the Israeli regime against the Palestinian people living in the holy city of al-Quds.