General
News ID: 3474812
TEHRAN (IQNA) – The secretary general of the Lebanese Hezbollah resistance movement warned Israel that any aggression on holy sites in the occupied Jerusalem al-Quds would lead to a regional war and destruction of the Tel Aviv regime. 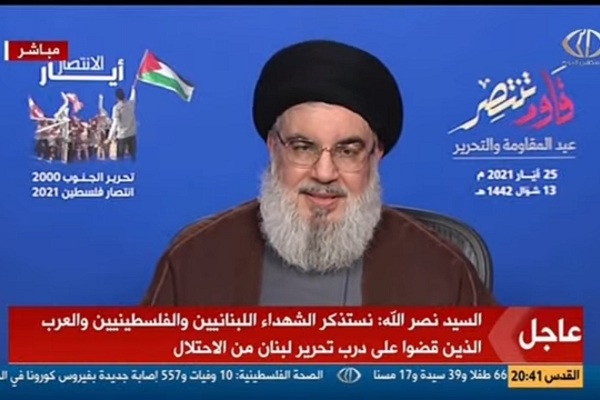 Sayed Hassan Nasrallah made the remarks in a televised speech on Tuesday, in his first address after the victory of Palestinian resistance groups in their fight against Israel during the regime’s latest war in the besieged Gaza Strip.

"Gaza surprised both friends and foes, to be honest," Nasrallah said. "And so, Israel misjudged the impact of its moves until matters reached a point when resistance in Gaza would have to carry out its threats."

Hailing the “steadfastness” of Palestinian resistance groups, Nasrallah said Israeli officials and military must reconsider their assessments based on what happened in the Gaza Strip and beware of the consequences of their aggression.

"What Gaza did was a qualitative historical step in the history of the conflict with the Israeli enemy, and it should be highly valued. The people of Gaza and the resistance were in a position to defend and sacrifice themselves for Jerusalem al-Quds, the al-Aqsa Mosque and the sanctities of the nation," the Hezbollah chief underlined, Press TV reported.

"You must know that harming Jerusalem, al-Aqsa Mosque, and the nation's sanctities is different from any other aggression you carry out," Nasrallah warned the Israeli regime. “Harming the al-Aqsa Mosque and the holy sites will not stop at the borders of the Gaza resistance, and will lead to a regional war and Israel’s destruction.”

"When the Muslim and Christian holy sites face a serious danger, there is no meaning for red lines or artificial ones. All the resistance movements can't sit back and watch if holy sites are in danger," he said, adding, “The whole world felt, in the latest battle, that there is one Palestinian nation moving in one direction towards one goal."

The secretary general of the Lebanese Hezbollah resistance movement also said the ‘Operation Sword of al-Quds’ by Palestinian resistance groups dealt a severe blow to normalization agreements with the occupying regime of Israel as well as the so-called deal of the century.

“After the battle in Gaza, we can clearly say that the deal of the century collapsed and vanished, and among its results is the restoration of the single soul to the Palestinian people inside occupied Palestine, and re-showing the true ugly face of Israel by killing the innocent and massacres and as an apartheid regime,” Nasrallah stated.

He emphasized that "the demise of the Israeli regime has become closer and the issue is only a matter of time."

Israel launched a bloody bombing campaign on Gaza on May 10 after harassment of Palestinians in Jerusalem al-Quds and attempts to steal their lands in the Sheikh Jarrah neighborhood of the city.

The occupying regime announced a unilateral ceasefire on Friday, which was accepted by the Palestinian resistance groups in Gaza with Egyptian mediation.

The Israeli airstrikes killed at least 253 Palestinians, including 66 children and 39 women, and wounded 1948 others, according to Gaza's Health Ministry.

During the fighting, Gaza-based resistance factions fired rockets into the occupied territories in response to the Israeli bloodshed, killing 12 people.