General
News ID: 3474927
TEHRAN (IQNA) – Having failed to achieve its goals in war, Saudi Arabia, which leads a military coalition against impoverished Yemen, claims it has suspended its attacks against Yemenis in an effort aimed at paving the way for a peaceful settlement to a years-long brutal war. 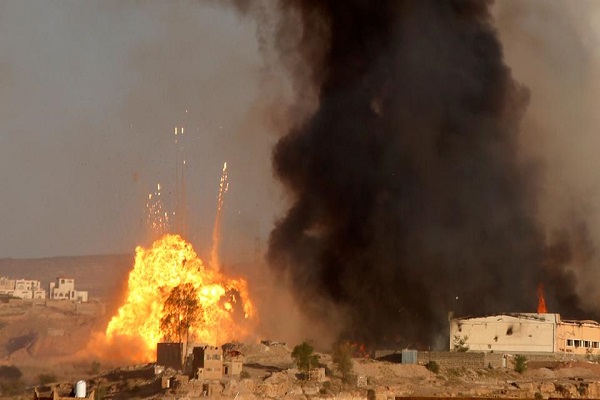 The Saudi-led coalition's military spokesman, Turki al-Maliki, made the remarks in an interview with the Saudi state television on Thursday, claiming that “no military operation has been carried out in the vicinity of Sana’a or any other Yemeni cities in the past period.”

He said the de-escalation was aimed at “preparing the political ground for a peace process in Yemen,” Press TV reported.

Saudi Arabia and a number of its regional allies -- including the United Arab Emirates (UAE) -- launched a brutal war against Yemen in March 2015. The ongoing war was launched to eliminate Yemen’s Ansarullah movement and restore the Saudi-backed former regime of Abd Rabbuh Mansur Hadi to power in Yemen.

The offensive has failed to achieve its goals, but pushed Yemen to the brink, killed tens of thousands of innocent people, and destroyed the impoverished state’s infrastructure.

Maliki's remarks come amid a months-long offensive by the Yemeni army and allied Popular Committees to liberate Ma’rib, which is the last significant pocket of Hadi-held territory in the north. The loss of Ma’rib would be a major blow Hadi and Saudi Arabia.

The Yemenis say the aggressors have to end all their attacks against Yemen, take out all their forces, end a simultaneous and crippling siege that they have been imposing on the country, and compensate the victims before entering any peace process.

Separately on Thursday, two industry sources speaking on the condition of anonymity, told Reuters that Yemenis prepare for a possible reopening of the Sana’a International Airport under UN-led peace efforts.

The construction work, they said, has begun in some parts of the airport.

The invading enemy has for years imposed an all-out blockade on the impoverished country. The siege includes the closure of Sana’a International Airport, which has made it impossible for food and medical supplies to reach the poor in the war-torn country.

The Saudi-led warplanes have targeted the airport numerous times for the past six years.

Airport director Khaled al-Shayef said in a Twitter post on Wednesday that he met Yemenia airlines to discuss maintenance and equipment at the facility, and also held talks with the Yemen Oil Company on fuel supplies for aircraft.

Saudi Arabia has also been enforcing a tight naval blockade on Yemen, particularly on Hudaydah, which acts as a lifeline for the impoverished nation, since August 2015, five months after it started the war.

Yemenis have stepped up attacks on Saudi Arabia in recent months, saying the retaliatory operations will continue as long as Riyadh carries on with its policy of bombardment and blockade.

Iraqis Marching toward Karbala for Arbaeen