Zionists to Be Expelled from Entire Palestine: Islamic Jihad

General
The link was copied
News ID: 3475271
TEHRAN (IQNA) – The head of the politburo of the Palestinian Islamic Jihad resistance movement underlined the unity between Palestinian resistance groups, saying through such unity they will expel the Zionists from Palestine’s soil. 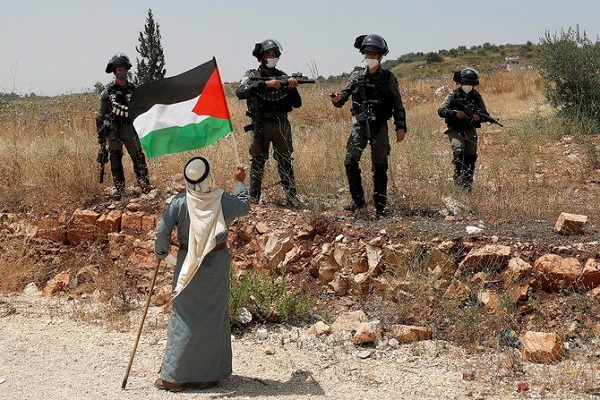 In remarks on Saturday, Mohammed al-Hindi said that the “Operation al-Quds Sword”, a term used by Palestinians to refer to May’s 11-day war between Israel and the Gaza-based Palestinian groups, showed that Palestine’s unity is achieved on the battlefield, the Palestinian Safa news agency reported.

Al-Hindi said that the war has not ended yet, in spite of the May 21 ceasefire between the two sides.

“The Zionist enemy does not want to acknowledge and absorb its defeat; it is trying to regain the initiative by continuing the aggression in al-Quds, the West Bank and al-Aqsa Mosque, and by continuing the siege of the Gaza Strip,” he added.

He also said the war with Israel is a war of wills and “we will force Israeli rulers to leave the West Bank and al-Quds and consequently all of Palestine.”

Throughout the war, from May 10 to 21, Israel continuously bombarded the strip. The campaign came after the regime’s repeated assaults against the Palestinians in the West Bank, in particular the forced displacement plots in the East Jerusalem al-Quds neighborhood of Sheikh Jarrah.

Israel has continued its policy of land theft in recent weeks, in spite of warnings by the Palestinian resistance groups in the besieged Gaza Strip about the repercussions of such moves.

More than 600,000 Israelis live in over 230 settlements built since the 1967 Israeli occupation of the Palestinian territories of the West Bank and East Jerusalem al-Quds, all of which are illegal under international law.

Hinting at the Israeli defense systems’ failure against the power of Palestine’s resistance, al-Hindi said true efforts are made to boost the relations between the Palestinian Islamic Jihad and Hamas, both of which are based in Gaza and fought side by side in the 11-day war against Israel.

Elsewhere in his remarks, al-Hindi rebuked the Arab countries that normalized their relations with the Israeli regime, saying their moves were “a dagger in the side of our nation’s jihad and Islamic sanctities.

Four Arab countries – the United Arab Emirates, Bahrain, Sudan and Morocco – agreed to normalize their relations with Israel under US-brokered agreements last year, when former US President Donald Trump was in office.

Spearheaded by the UAE, the move has sparked widespread condemnations from the Palestinians as well as nations and human rights advocates across the world, especially within the Muslim world.

Last Saturday, a member of the Palestinian Fatah movement’s Central Committee censured Abu Dhabi’s Crown Prince Mohammed bin Zayed (MBZ) as “a traitor” to the Palestinian cause, saying the UAE must be expelled from the Arab League due to normalizing ties with Israel.

“The people of the Emirates are free and great and we do not attribute this betrayal to them, because the only traitor is Mohammed bin Zayed,” Abbas Zaki said.