General
The link was copied
News ID: 3475311
TEHRAN (IQNA) – Police and civil authorities in the Indian capital have demolished a makeshift mosque in a Rohingya camp, say the refugees, weeks after a massive fire had engulfed the settlement. 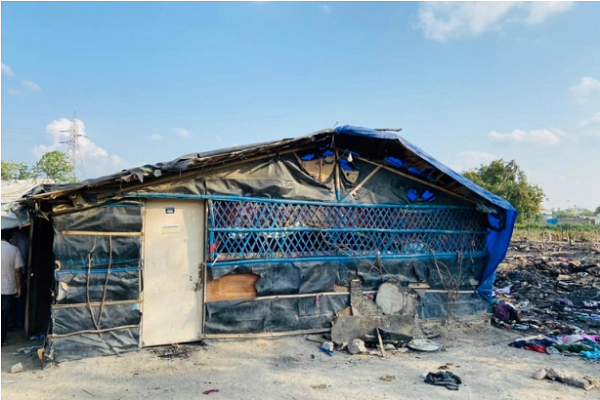 The mosque, made up of tarpaulin sheets and bamboo sticks, was bulldozed at about 7am local time (01:30 GMT) on Thursday, at the camp located in New Delhi’s Madanpur Khader area in the city’s south, bordering Uttar Pradesh state.

Nearly 300 refugees, most of whom fled a brutal military crackdown in neighboring Buddhist-majority Myanmar, told Al Jazeera the structure was demolished despite their appeals to the authorities not to do so.

The Muslim-majority Rohingya say they have been left without a place to worship.

“The demotion began an hour after the Fajr prayers in the mosque,” Mohammad, 33, who wanted to be identified with his first name only for fear of reprisal, told Al Jazeera.

“They first destroyed the toilets and washrooms, uprooted a water hand pump and then demolished the mosque – all within 10 minutes.”

He said when the refugees tried to protest, the officials instead told them they were “illegal immigrants” living in the camp by “encroaching the land”.

“I told them this is our place of worship but they said you talk a lot,” said Mohammad.

“For us, a mosque is just like the Hindus have temples. What they did is totally wrong but we are powerless.”

Obaidullah, a young Rohingya boy, said he felt angry and his eyes welled up seeing the demolition of the mosque but he “could not do anything to stop them”.

A police official at the nearby Kalindi Kunj police station told Al Jazeera the demolished structure was not a mosque, but just a ramshackle hut. He refused to answer further questions.

Pravir Singh, the subdivisional magistrate of the area, told Al Jazeera he did not know about the demolition of the mosque, adding that he was not competent to give an official statement on the matter.

On June 13 last month, the camp that hosts more than 50 refugee families living in ramshackle shelters, was destroyed in a massive blaze – the second time the camp had been reduced to ashes since 2018.

A small portion of the mosque, located at the entrance of the camp, was damaged in the fire, which forced the refugees to live in tents provided by local nonprofits and activists.

Activist Aasif Mujtaba, whose group Miles to Smile assists the Rohingya and collaborates with the government in their rehabilitation, said officials had been alleging that the camp, including the mosque, stood on encroached land.

Shamsheeda Khatoon, a 27-year-old Rohingya woman, alleged the mosque’s demolition was “well planned”. She said officials on Wednesday pitched tents on the road outside the camp.

“They asked the refugees living in tents located in the portion of the camp that falls in Uttar Pradesh state to relocate to the roadside tents. Then today morning, they demolished the washrooms and water supply pipes and the mosque,” she said.

“They did not allow us to even take out the copies of the Quran and other religious books.”

Khatoon said the demolition of washrooms and water pumps has raised sanitation concerns among the women at the camp. “We now have no place to defecate, bathe or wash clothes.”

An estimated 40,000 Rohingya refugees, many believed to be undocumented, live in cramped camps across Indian cities, including Jammu, Hyderabad and Nuh in Haryana state.

The United Nations refugee agency has provided some of them with refugee cards, which helps them to access basic services and is supposed to protect them from police action.

More than 750,000 Rohingya took shelter in Bangladesh in 2017 after the Myanmar army launched a brutal crackdown against the Rohingya, which the UN said was conducted with a “genocidal intent”.

Bangladesh currently holds more than a million Rohingya in cramped and squalid camps along its border with Myanmar. Large numbers of them have also taken refuge in neighbouring Asian countries, including India and Malaysia.

“The Rohingya are living a tough life in India where they also face hate and violence from Hindu right-wing groups,” said Mujtaba, the activist.

“First they lost their huts to fire and now their mosque and washrooms have been destroyed. This is blatant violation of human religious rights of the refugees.”

Ali Johar, a Rohingya community activist in New Delhi, told Al Jazeera the “refugees are also humans and the right to religion is a fundamental right in India”.

“Demolishing their mosque in this manner is hurtful, to say the least,” he said. “The government should follow a compassionate approach towards Rohingya so that we may not have to rebuild our lives again and again.”