Allegation of Quran Desecration Leads to Riots in Pakistan

General
News ID: 3476705
TEHRAN (IQNA) – After alleged burning of a copy the Holy Quran at a mosque, riots broke out in Tangi tehsil of Charsadda district in the Khyber Pakhtunkhwa province of Pakistan. 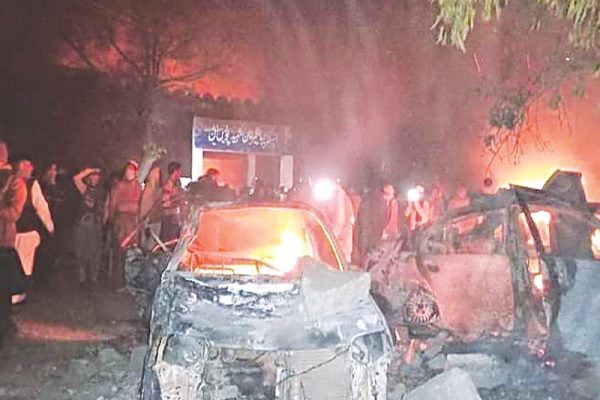 At least one man was injured after police resorted to firing in the air and teargas shelling to disperse an unruly mob that vandalized a police station.

Witnesses said the enraged protesters broke into the compound of Mandani police station, set on fire at least 17 vehicles and motorcycles parked there and destroyed official record. Police vacated the station and escaped.

Rescue personnel were called to extinguish the blaze.

The protesters also took away the seized weapons from the police station. After torching the station, the frenzied mob set on fire a police post in the Dhaki area. They then proceeded to Ziam post of the Omarzai police station and also put it on fire.

The protesters were still camping outside the police station till late in the night and demanding that the accused be handed over to them. Eyewitnesses said police had completely failed to control the situation.

Additional police personnel had to be called in from Nowshera and Mardan districts to quell the riots.

Mandani circle DSP Ishaq told Dawn that the person who had allegedly torched the Holy Quran was apparently mentally deranged, adding that the accused was immediately taken into custody and shifted to an unknown location. “Apparently, the accused is mentally unstable and he cannot speak.”

The news about the burning of the Holy Quran spread like jungle fire in the area and a large number of people encircled the police station. Local officials held talks with the protesters to pacify them, but the situation went out of control when the mob demanded handing over of the accused.

Later, local leaders of the Jamiat Ulema-i-Islam-Fazl staged a protest demonstration in Mandani bazaar and demanded punishment to the accused. Local people also held a rally in Dhaki bazaar in protest against the incident.

Peshawar Commissioner Riaz Khan Mahsud told Dawn that elders and Ulema held talks with the protesters to defuse the situation, adding that the use of force against the protesters would be the last option.

Police officials said the Mardan DIG and Charsadda DPO, along with additional forces from Nowshera and Mardan, held an emergency meeting at the Omarzai police station to make a strategy for controlling the situation.