Social
News ID: 3477568
TEHRAN (IQNA) – A group of hijab-wearing football players gathere in Paris's Luxembourg Garden on Wednesday to protest a recent decision which bans them from wearing their scarves in sports competitions. 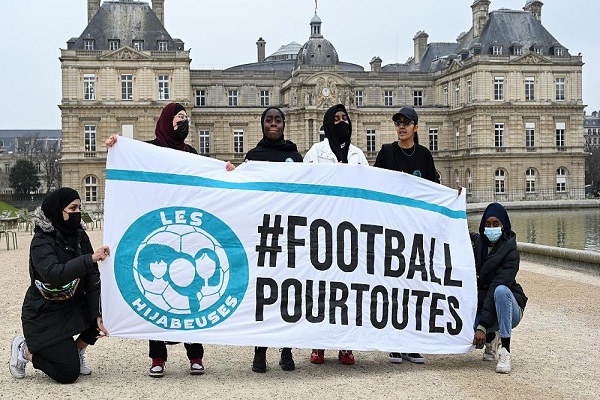 "The purpose of this non-violent action, organised by the Alliance Citoyenne (Citizen Alliance) group, is to protest against the amendment that was voted by 160 senators, which aims to prohibit the wearing of religious symbols within sports federations, therefore during official competitions," said Founé Diawara, co-president of the collective Les Hijabeuses, an offshoot of the Citizen Alliance group.

"What bothers us is that some women are being left out, including thousands of women today who wear the veil and who practice soccer. And once again, they exclude us, whereas the fundamental values of football and sport are to unite and to come together," Diawara added.

Last week, French senators voted to ban the wearing of religious symbols during events and competitions organised by sports federations.

"We don't see why we should remove it. There is no reason, there is nothing in the law that says that the veil is not in cohesion with the values of sport and with sport. So I don't see why we would be forced to remove it, there is really nothing that would justify that," she went on.

The French Football Federation claims it's defending the principle of laicity in sport and has received the support of the French Senate.

"This is something personal and intimate and there is no right, there is nobody who can ask us to remove it."