Culture
News ID: 3477904
TEHRAN (IQNA) – An international forum on the role of Sufism and Islamic Irfan (mysticism) in creating peace in society was held in Lahore, Pakistan. 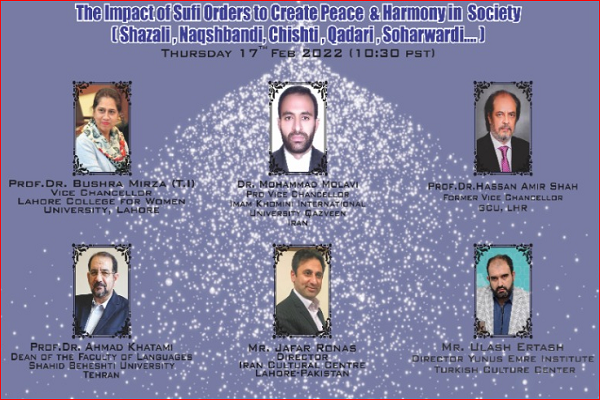 The Persian Language and Literature Department of Lahore University’s College of Women organized the event.

It was attended by scholars, thinkers and researchers from Iran, Pakistan, Turkey, Bosnia and Herzegovina, Bangladesh, India, the US and Serbia.

The participants elaborated on the concept of Irfan in Islam and its status in the past and present, according to the Islamic Culture and Relations Organization.

Pakistani scholar Hassan Amir Shah in his address said that a Sufi is one who renounces worldly desires and dedicates his life to getting closer to God.

He said that today there are many followers of Sufism in Muslim countries such as Pakistan, Afghanistan, Turkey, Iraq, Egypt and Persian Gulf Arab countries.

He added that followers of Sufism have never resorted to violence due to their way of thinking but have been attacked by extremists in recent decades.

Turkish scholar Ulash Ertash was another speaker at the forum who discussed the role of Persian poet and mystic Molavi (Rumi) in development of peace and friendship in the Muslim world.

He said Molavi had a universal view and wanted to bring peace and security to human beings via his poetry.

Alor Mosiq from Bosnia and Herzegovina presented a paper which focused on the importance of cognition in Islamic Irfan.

Jafar Ronas, head of the Iranian Culture House in Lahore also addressed the international forum, saying mysticism has roots in Islam’s teachings that also has adopted elements from other cultures and religions as well.

He also highlighted the need for paying attention to humans’ spiritual growth in order to end wars and establish peace in the world.