General
The link was copied
News ID: 3479298
TEHRAN (IQNA) – Secretary General of the Muslim World League Mohammed bin Abdul Karim Al-Issa described the religious motive as one of the strongest, most vital and sustainable motivators of humanitarian action. 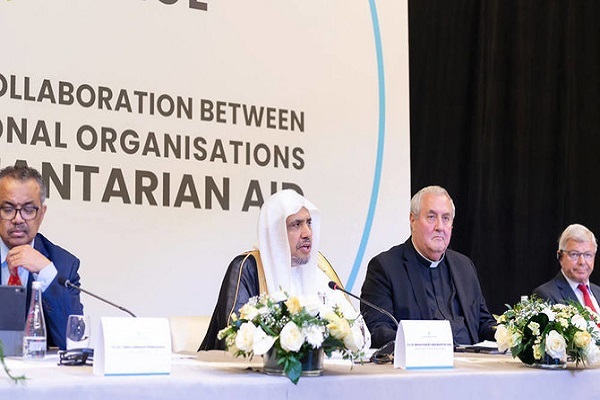 He has taken part in a summit of major international organizations to coordinate responses to accelerating global challenges.

The forum, held in Geneva, Switzerland, was launched under the title: “Cooperation between International Organizations in the Humanitarian Fields.”

It included — in addition to the MWL and the World Council of Churches — the World Health Organization, the UN High Commissioner for Refugees, UNICEF, the International Federation of Red Cross and Red Crescent Societies, the World Food Program and a group of prominent international leaders in humanitarian work.

However, he expressed his regret that “humanitarian work has not reached the required level of solidarity and sympathy, and the gap between the rich and the poor remains wide, despite the existence of one international system.”

Al-Issa added: “We do not object to the existence of the rich and the poor, as this is the nature of life, but we call on the rich to alleviate the suffering of the poor by supporting them, especially with the necessities of life such as food, medicine and education.

“It is painful, for example, to see the rich obtain a COVID-19 vaccine while the poor do not get it, or do not get it until late, or get only some doses.

“There is also another reason that drives and even motivates humanitarian work, which is the religious aspect.”

The MWL chief described the religious motive “as one of the strongest, most vital and sustainable motivators of humanitarian action.”

He stressed that it is a faith motive linked to heaven, “and everything related to the creator, glory be to him, has a strong cord that is not affected by any emergency and cannot be severed.

“This is why we believe that voluntary work is one of the strongest pillars of the work of humanitarian organizations around the world, the most important of which is what is based on a religious motive related to the creator. Honest and abstract religious feelings heal wounds, quench thirst, feed the hungry, educate, train and sponsor orphans and widows.”

Al-Issa said: “It should be noted that it is important for the relevant international organizations to have performance measurements for countries in the field of humanitarian work, and they should honor public and private institutions, and individuals who have outstanding efforts in humanitarian work, whether in the field of food, health, education, training or others, including helping the marginalized and the abused, and those subjected to forced labor, particularly human trafficking crimes.”

He reviewed the efforts of the MWL in humanitarian work around the world, stressing that its premise is “faith and humanity without any discrimination,” religious or otherwise. He announced the MWL’s plan to launch an international award to promote the most important efforts in service of humanitarian work.