General
News ID: 3479476
TEHRAN (IQNA) – A leader of Shia Muslims in Burkina Faso says Twelver Shiism has taken root among the people of the West African country ever since the victory of Iran’s Islamic Revolution in 1979. 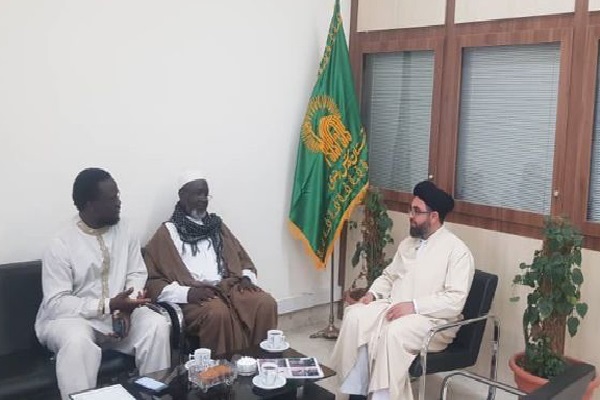 “Some 60% of the population in Burkina Faso are Muslims, with the majority being advocates of Sufism. The next influential Muslim denominations are Shias and Wahhabis”, said Sheikh Ali Badra, a Shia Muslim leader in the landlocked West African country of Burkina Faso, in a meeting with Seyyed Mohammad Zolfaghari, the international deputy of Scientific and Cultural Organization affiliated to Imam Reza shrine in Mashhad, northeast Iran.

The African Shia leader expressed happiness that the Shia Muslims could freely perform religious activities and rituals in the African country without any government curbs. “The only problem is the troubles and accusations made by Wahhabis against the Shias.”

“Backed from outside, the Wahhabis are currently benefiting from television and radio networks and other forms of mass media, which are out of bounds to Shias. Unfortunately, we lack the means to publicize the teachings of the holy Prophet’s Infallible Household among the people in Burkina Faso,” he said.

Nevertheless, he asserted that the Shia community was squarely standing up against hostile measures of the enemies in the African nation.

Sheikh Badra stated that Imam Khomeini opened the eyes of people across the world with his revolutionary movement. “Prior to the Islamic Revolution, we didn’t have a clear understanding of Ashura and Karbala. Yet, we’ve been annually holding mourning ceremonies during Muharram (the first month on the lunar calendar) ever since.”

He concluded that the Shias of Burkina Faso were followers of the Leader of the Islamic Revolution, Ayatollah Khamenei.