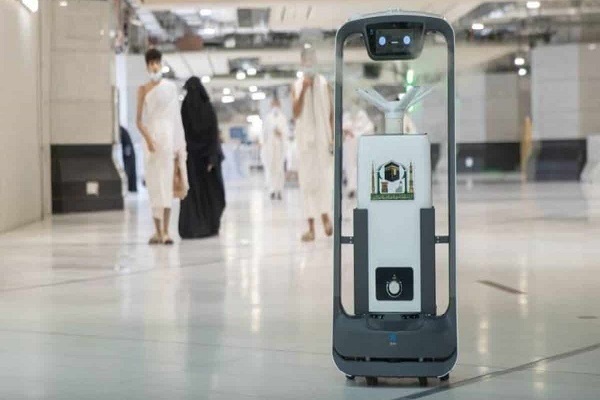 Saudi Arabia’s General Presidency for the Affairs of the Two Holy Mosques said it is making all efforts to ensure the health and safety of pilgrims, adding it has provided 11 smart robots for sterilization and disinfection inside the Grand Mosque.

The robots, which had obtained a SLAM patent, have a battery charging feature, and one robot can work from 5-8 hours without human intervention. The smart device has a capacity of 23.8 liters, and consumes two liters every hour, to eliminate bacteria in an area of 600 square meters each round.

It can walk for a distance of 3 kilometers continuously without human intervention, and the size of the dry fog particles used in the sterilization process is from 5-15 micrometers.

The mosque has 25,000 carpets, while around 4,000 male and female workers are employed in addition to 11 smart robots to disinfect and sanitize the site around the clock.

The presidency has enlisted 400 employees to receive worshipers and pilgrims, direct them to the mataf and various other prayer spaces, and regulate entry and exit to and from the Grand Mosque.

There are 25,000 Zamzam containers dotted around the mosque, 20 smart carts holding 80 liters of water are in operation, and 516 drinking fountains are available.