General
News ID: 3479590
TEHRAN (IQNA) – The custodian of Imam Reza (AS) holy shrine described the Islamid Republic of Iran as a product of the event of Ghadir. 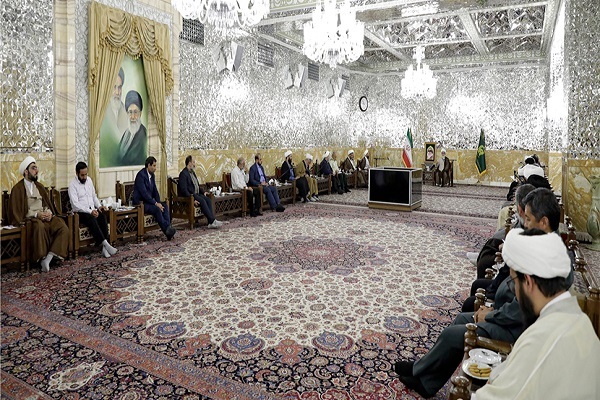 Hojat-ol-Islam Ahmad Marvi made the remark in a meeting with members of Vilayat ten-day celebrations headquarters in Imam Reza holy shrine.

Referring to the relations between the Islamic Revolution and Ghadir incident, he stressed, “The Islamic Republic is a product of Ghadir. Ghadir can be considered as mother of our revolution; therefore, we have to do our best in commemorating Ghadir”.

He added, “Ghadir is not a mere historical event; all efforts of the Prophet (PBUH) of Islam are related to Ghadir incident and introduction of Vilayat. Ghadir must receive much more attention, therefore”.

Elsewhere in his remarks, Hojat-ol-Islam Marvi stated, “If Imam Hossein’s (AS) martyrdom anniversary in Muharram is held gloriously every year, it is because of public-based nature of the ceremonies”.

He added, “If Islam has been preserved throughout the centuries and in all historical ups and downs, it’s because of people’s presence and their significant role in commemorating and preserving Islamic rituals”.

Pointing to the manner of observing these ceremonies, the custodian of Imam Reza holy shrine mentioned, “What is really important in holding these ceremonies is to try to convey right understanding of Ghadir to the society; to fulfill this, paying enough attention to the words of Imam Khomeini (RA), Ayatollah Khamenei, and Ayatollah Mottahari cab be helpful”.

Hoj. Marvi went on to say, “During 23 years of prophethood, the Prophet (PBUH) used every opportunity to express virtues and merits of Imam Ali (AS). In Ghadir, however, his personality and position were introduced as an Imam and leader. Ghadir introduced a system for the Islamic Ummah”.