General
News ID: 3480019
TEHRAN (IQNA) – Shia Muslims mourning the martyrdom anniversary of Imam Hussein (AS) came under attack by Nigerian troops in the city of Zaria, northwestern state of Kaduna, on Monday. 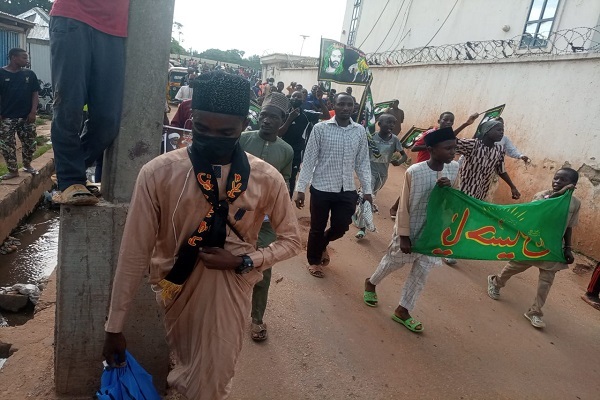 Several people were killed and many others injured in the attack that took place during a peaceful annual Ashura procession, according to reports.

Sheikh Abdulhamid Bello, a spokesman for the Islamic Movement in Nigeria (IMN), confirmed that at least four Shia mourners were killed by security forces in the attack on the peaceful mourners' procession held in Zaria's Central Market on Monday.

"Many of our members were attacked, and at least four people have been confirmed dead," Sheikh Bello, who is the representative of IMN leader Ibrahim al-Zakzaky in Zaria, was quoted as saying.

Bello said the death toll from the attack had risen to six, while at least 50 more had sustained varying degrees of injury and were receiving medical attention in health facilities.

He accused the soldiers of “sporadic shooting at innocent citizens, including Shia members”. Unconfirmed reports said Sheikh Zazaky's nephew was among the dead.

An eyewitness cited by Iranpress, Abdulhakam Muhammad, said the procession had already finished peacefully when the police moved in and started firing teargas.

He said that after the police initiated the attack, the soldiers who were initially stationed in front of Emir of Zazzau Palace, starting firing live bullets, killing and injuring the mourners who were leaving the marketplace via the Babban Dodo roundabout.

Ashura mourning processions are held each year in many cities and towns in Nigeria. The mourning procession held on Ashura, the tenth day of Muharram the first month in the Islamic lunar calendar, marks the day Imam Hussein (AS), the grandson of Prophet Muhammad (PBUH) was unjustly assassinated by the tyrant of the time Yazid in Karbala, Iraq.